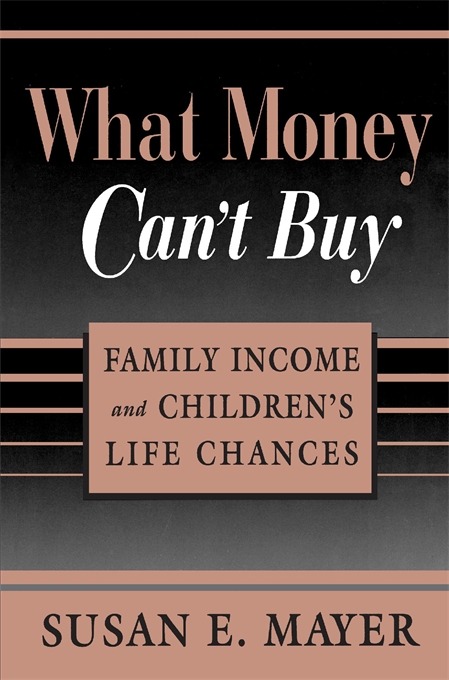 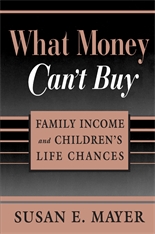 “Everyone involved in ’welfare reform’ could usefully read What Money Can’t Buy, a study by economist Susan Mayer of the University of Chicago. Its message is somber: as a society, we are fairly helpless to correct the worst problems of child poverty. This is not a new insight, but by confirming it, Mayer discredits much of the welfare debate’s overwrought rhetoric. `Welfare reform’ may raise or lower poverty a bit (we can’t say which), but neither its supposed virtues nor its alleged vices are powerful enough to alter the status quo dramatically. What’s impressive about Mayer’s study is that it contradicts both her politics and her history...[and] demolishes much of the welfare debate’s rhetorical boilerplate, liberal and conservative.”—Robert J. Samuelson, Newsweek

“Mayer’s findings make a useful--and sometimes surprising--contribution to the long and painful debate over welfare reform and its iffy implementation...More money does help the children of poor families, Mayer concedes. But the effect is considerably less--and more complicated--than is generally thought, even among social scientists, her research shows...The results of her extensive research--appendices, references, and notes make up almost one third of the book--show that ’once children’s basic material needs are met, characteristics of their parents become more important to how they turn out than anything additional money can buy.”—Joan Beck, Chicago Tribune

“[Mayer] explores a social-science conundrum that has been near the center of the technical policy debate for 30-odd years...Some of her [social science] innovations are important contributions to the art...[Her] analysis indicates that more income transfers are not going to do much about the life chances of the children whose current life chances she properly deplores. The details of her findings will be argued by policy analysts of all stripes...[but] to transgress those [political] boundaries has required an independence of spirit...[and] Mayer has made it a bit easier for more young scholars to question the orthodoxy.”—Charles Murray, Washington Times

“[In What Money Can’t Buy, Susan Mayer] developed a statistical model that predicted what would happen to children’s prospects if poor families’ incomes were increased from $15,000 to $30,000 a year. The surprising answer is: not much. Ms Mayer found that although doubling the income of poor families would lift most children above the poverty line, it would have virtually no effect on their test scores and only a slight effect on social behaviour...There are two reasons for this. First, Ms Mayer notes that the extra money tends to be spent on such things as restaurant meals, clothes, dishwashers, roomier houses or second cars, none of which matters much in helping children succeed in school or life...Second, good parenting has much in common with being a good worker. In both roles, the reward goes to diligence, determination, good health, willingness to co-operate, and so on. Children with parents who possess these qualities tend to do well in life, even if mother and father do not make much money.”—Economist

“A major accomplishment that merits and will almost certainly receive the attention of social scientists, policymakers, and the general public. Mayer has identified a central policy issue and examined it carefully and without flinching from many angles. It is not likely to be the last word on the relationship between family income and children’s outcomes...Like most important books, it will redefine the terms of the debate about the effects of family income on child outcomes. Whether one agrees with its conclusions or not, they cannot be ignored.”—Saul D. Hoffman, Contemporary Sociology