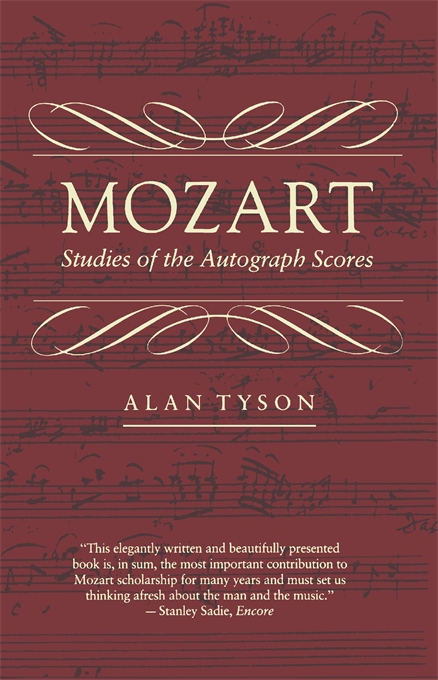 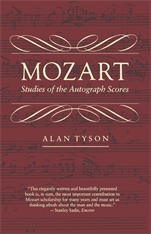 Studies of the Autograph Scores

The results and implications of Alan Tyson’s work on Mozart have had a profound impact on virtually every aspect of research on this composer: biography, chronology of compositions, working methods, stylistic analysis. Central, perhaps, are Tyson’s discoveries on chronology: time and again he has proved that datings, often of large, well-known works, that have been accepted for generations are not only erroneous but based on little more than speculation. This book assembles his major articles, previously scattered through magazines, journals, and festschrifts, plus two unpublished pieces, into a treasure trove for musicologists and music lovers.

Tyson’s investigations, using primarily paper analysis, span Mozart’s entire career and the full range of genres—string quartets, operas, choral music, keyboard music, concertos, and symphonies. He goes into the genesis of major works such as Cosi fan tutte, the “Prague” Symphony, the Piano Sonata K.333, the “Haydn” quartets, and La clemenza di Tito. His conclusions about chronology bear directly on biographical questions and current accounts of Mozart’s stylistic development as well as his compositional methods. We learn here, for example, that the “first” horn concerto was in fact Mozart’s last, and that he did not even complete the second movement, which was finished after his death by his pupil Süssmayr. The writing (and, in some cases, rewriting) of his later operas such as Figaro and Cosi fan tutte also lends itself to investigation by the same techniques; this is resulting in the rediscovery of some lost measures and little-known variant versions of arias.

Tyson’s style is clear and elegant, and the originality of his work and the soundness of his inferences make this book a pleasure.