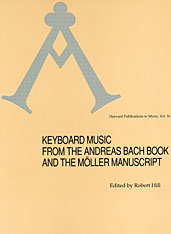 Keyboard Music from the Andreas Bach Book and the Möller Manuscript

This anthology of 55 keyboard works provides an instructive picture of the music of the young J. S. Bach within the context of a spectrum of works by his elder contemporaries.

The Andreas Bach Book and the so-called Möller Manuscript, the most important sources for the young Bach’s keyboard music, were compiled in the early eighteenth century by Bach’s eldest brother and only keyboard teacher, Johann Christoph Bach of Ohrdruf, himself a pupil of Johann Pachelbel. The significance of the two manuscripts lies not only in their close connection to J. S. Bach (as evidenced by Bach autographs in both books), but equally in the fact that they contain some of the most outstanding keyboard music by Bach’s North German colleagues: Georg Böhm, Dietrich Buxtehude, and Johann Adam Reincken. While some of these compositions have been published in modern editions, others have been entirely overlooked.

This anthology presents keyboard works by the young J. S. Bach which are either little known or are earlier versions of better known works (for example, the Passacaglia in C Minor, BWV 582). Also included are all the unpublished keyboard works in the two manuscripts, as well as works by lesser known composers for which modern editions are not easily accessible. Rounding out the picture are works by well-known contemporaries for which the transmission in the young Bach’s circle proves particularly significant.

Intended for both player and scholar, this edition offers the texts of the two manuscripts in an easy to read layout that emphasizes the clarity of the counterpoint. Of particular interest to organists is the presentation of the organ works in the appropriate notion of the time, on two staves with the pedal voice integrated in the bass staff.