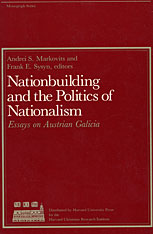 Nationbuilding and the Politics of Nationalism

The province of Galicia was the easternmost land of the old Habsburg Empire. Throughout the nineteenth century it was noted for political conflicts and the cultural vibrancy of its three major national groups: Poles, Ukrainians, and Jews.

This volume brings together for the first time eleven essays on various aspects of the last seventy-five years of Austrian Galicia’s existence. Included are general surveys on Galicia within the imperial Habsburg system and on the fate of Ukrainians, Poles, and Jews within the province. Various aspects of Ukrainian development receive special attention, and a major bibliographic essay completes the volume. Among the leading specialists represented are Peter Brock, Paul R. Magocsi, Ezra Mendelsohn, Ivan L. Rudnytsky, and Piotr Wandycz.