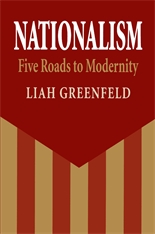 “Greenfeld displays near-encyclopedic knowledge of the culture and history of various countries; her enterprise is not just impressive, it is heroic… In this age of specialization, it is refreshing to come across a new book that attempts ‘to understand the world in which we live.’ For having tackled an enterprise of such magnitude and complexity, the author deserves our admiration.”—Walter Laqueur, The Washington Post Book World

“With great erudition, Ms. Greenfeld traces the rise of nationalism in five countries—England, France, Russia, Germany and the United States—through the prism of sociological history… This book is a great contribution to understanding nationalism’s place in the world.”—The Economist

“[An] exhilarating, ambitious, and thoughtful study… Greenfeld’s analysis allows one to see just what is wrong with that strain of liberal thinking that views nationalism as a form of atavism.”—Michael Ignatieff, The New Republic

“Greenfeld is a trenchant scholar. Her book employs all the apparatus of the academy, complete with quotations from historical sources in five languages: it is a work of striking erudition.”—David Warsh, The Boston Globe

“Liah Greenfeld has written a big book: a strong theoretical description and explanation of modern nationalism, a set of brilliant historical studies of its European versions, and an account, at once analytical and passionate, of how it sometimes turns out well and sometimes very badly. No one will write about nationalism again without starting here.”—Michael Walzer, Institute for Advanced Study, Princeton