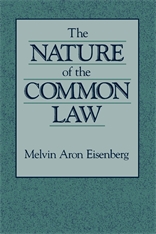 The Nature of the Common Law

Much of our law is based on authoritative texts, such as constitutions and statutes. The common law, in contrast, is that part of the law that is established by the courts. Common law rules predominate in some areas of law, such as torts and contracts, and are extremely important in other areas, such as corporations. Nevertheless, it has been far from clear what principles courts use—or should use—in establishing common law rules. In this lucid yet subtly argued book, Melvin Eisenberg develops the principles that govern this process.

The rules established in every common law case, he shows, are a product of the interplay between the rules announced in past precedents, on the one hand, and moral norms, policies, and experience, on the other. However, a court establishing a common law rule is not free, as a legislator would be, to employ those norms and policies it thinks best. Rather, it can properly employ only those that have a requisite degree of social support. More specifically, the common law should seek to satisfy three standards. First, it should correspond to the body of rules that would be arrived at by giving appropriate weight to all moral norms, policies, and experiential propositions that have the requisite support, and by making the best choices where norms, policies, and experience conflict. Second, all the rules that make up the body of the law should be consistent with one another. Third, the rules adopted in past precedents should be applied consistently over time. Often, these three standards point in the same direction. The central problems of legal reasoning arise when they do not. These problems are resolved by the principles of common law adjudication. With the general principles of common law adjudication as a background, the author then examines and explains the specific modes of common law reasoning, such as reasoning from precedent, reasoning by analogy, drawing distinctions, and overruling. Throughout the book, the analysis is fully illustrated by leading cases.

This innovative and carefully worked out account of the common law will be of great interest to lawyers, law students, students in undergraduate legal studies programs, scholars interested in legal theory, and all those who want to understand the basic legal institutions of our society.