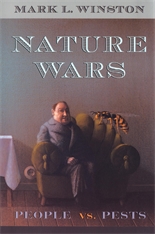 “Humans continue to deploy weapons of mass destruction against other creatures of this planet, namely the insects and bugs that consume our crops. No matter what we do, we seem unable to eradicate them, and there are now those who believe that this fifty-year onslaught is beginning to rebound on us. Mark Winston, author of Nature Wars, is one of them. His book is…interesting…a good historical approach to the subject…[and] makes fascinating and well-balanced reading.”—John Emsley, The Times Literary Supplement

“Nature Wars is an effective primer for the general reader on our struggles against insects and other pests… In an articulate and accessible writing style, Winston explains the pesticide dilemma, the threat that our reliance on synthetic pesticides poses both to human health and safety and to the preservation of what is left of the natural environment… Winston’s discussion of these controversial issues, and the conflict between humans and pests, will be helpful to anyone who hopes to develop an informed opinion about our continuing war with nature.”—Lawrence M. Hanks, Nature

“Winston…brings an unusually reasonable and compassionate voice to a debate usually swarming with harangues… Winston understands the impulse [to turn to powerful chemicals to control pests], but he also understands that the consequences can be harmful and surprising… Nature Wars leaves room for hope by setting an example of reasonableness… He cuts through hysteria, spotlighting the real threats of genetically engineered plants…[and] recommends tolerance toward the roach… If people would only listen to voices like Winston’s, our world would be safer for organisms in their natural places—and even for pests like us.”—Polly Shulman, Discover

“In this well-written, up-to-date account of the history of pest-control technology, Mark Winston describes how successful alternative methods can be… If we are to realise the goal of controlling pests without poisoning ourselves or the wildlife around us, we need to match their evolutionary adaptability with ingenuity in a diversity of control measures.”—Phil Gates, BBC Wildlife

“With a gift for turning the arcane into amusing prose, Winston explains how natural pheromones, sterilization strategies, and insect predators are better alternatives for pest control.”—Science News

“Winston is probing and thoughtful, whether he is exploring what he contends was an unwarranted public outcry over a 1992 spraying in Vancouver of the biological control Bacillus thuringiensis to thwart a gypsy-moth invasion, or the likelihood that the public will view as a failure the ongoing effort in the Okanagan Valley of British Columbia to stop the spread of codling moths (an apple pest) by releasing sterile male moths.”—Robert Braile, The Boston Globe

“[An] erudite and fascinating book… Before telling some very good tales about multiplying moths, gnawing rates and invading coyotes, Winston sets down a few key economic facts… [And] the lesson here, says Winston, reads like a Greek tragedy: The more modern agriculture removes biodiversity from the land, the more susceptible it becomes to pests, which ultimately means more pesticides. This deadly cycle explains why the promise of biological controls of the use of natural predators has remained just that, a promise.”—Andrew Nikiforuk, The Globe and Mail

“Mark Winston’s study of pest-control regimes and his conclusion that we should go easier on pests…is a compelling argument and certainly lively.”—Michael McCarthy, The Independent

“If the dangers are well known and legislators are prepared to regulate the release of chemicals into the environment, is there still a problem? Mark Winston, in his book Nature Wars, firmly believes there is… I recommend it to all those concerned with green issues, be they scientist, student or layman.”—Graham Elmes, The Times Higher Education Supplement

“Winston makes a strong case for pest management versus our ill-fated attempts at pest eradication. He supports his approach with a battery of case histories illustrating the complex political, biological, economic, social and personal interactions that lie behind each pest management decision… Winston also discusses the problems arising from the evolution of pesticide-resistant populations of target pests, the impact of control measures on non-target organisms, the tendency of consumers to overreact to the sight of a single cockroach or a blemished fruit, and the attitude that we have a divine right to manipulate nature to shape a world of human design.”—American Biology Teacher

“Mark Winston is that rare person: an entomologist (studier of insects) who, to judge from Nature Wars, would make a charming and entertaining dinner party guest. In Nature Wars, short listed for last year’s BP Natural World book award, he shows how dependence on chemical pesticides, and unrealistic consumer standards for bug-free houses and gardens, have contributed to massive over-use of dangerous chemicals.”—Andy Neather, Earth Matters [UK]

“In his book Nature Wars, Mark Winston, a full Professor of Biological Sciences at Simon Fraser University, has managed to make the topic of pest management fascinating even to those not working in the field. It is well researched, probing, and accessible… Winston hits all the relevant scientific points and his folksy style presents them in language that anyone can understand.”—Barbara Kukan, ESC (Entomological Society of Canada) Bulletin

“In Nature Wars Professor Winston brilliantly strips away the media hype to unveil issues of significance such as the indiscriminate and wanton destruction of thousands of insects and arthropod species, seemingly for our benefit. With his background in biological sciences, he builds up a strong case as to why we need to protect these creatures for our own sake.”—European Business Report

“Mark Winston is writing about a population that has lost its perception of itself as a species amongst other species, enjoys horror movies about giant insects, killer bees or human-insect transformations and can no longer see itself as part of a global life-cycle. He offers some thoughtful and moderate views on the way forward… It is a most readable book, a work of real scholarship and provides insights into social history and the phenomena of public opinion as well as the fascinating survey of pest-management.”—Brigitte Norland, Resurgence [UK]

“[Nature Wars] is an extremely coherent and concise statement of progressive thinking on how to manage agricultural pests…it positively exudes good sense and rationality. I strongly recommend it to anyone who has thought twice about biting into a shiny apple on a supermarket shelf… Winston has thought hard about pest management, and believes passionately that it can be improved. This is an excellent book and should be very widely read.”—H. C. J. Godfray, Tree [UK]

“Winston here enlightens those who bewail the massive use of chemical insecticides outdoors—and indoors reach for bug spray at first sight of a creepy crawly. Writing for a general, not technical, reader, Winston descants on campaigns against rats and roaches, then discusses the main strategies for ‘naturally’ controlling agricultural pests… A balanced overview.”—Gilbert Taylor, Booklist

“Winston manages to shape the art and science of pest management into a fascinating subject. Pests eat our homes and crops and clothes, they transmit disease, they plague our skin, hair, and digestive tracts… And, Winston asserts, ‘it is time to reconsider the terms of engagement.’ Why? Because chemicals attack a pest’s nervous system, which (unfortunately) resembles our own rather closely. The consequences: the author cites one million cases, worldwide, of human pesticide poisoning annually (and 20,000 fatalities among those). Moreover, pest resistance to chemicals is growing even as the chemicals continue to decimate natural predator populations essential to the earth’s balance. Winston suggests various remedies for our faulty attitudes and strategies… Like a new Rachel Carson for the new millennium, Winston delivers a nontoxic dose of much-needed common sense.”—Kirkus Reviews

“It has been over 30 years since Rachel Carson’s Silent Spring sounded the alarm about the dangers of chemical pesticides. Now Winston is issuing another wake-up call by showing how our battle against pests has become a war on nature. Winston provides case studies demonstrating alternative methods of pest control, explaining how political, social, economic, and biologic interactions behind pest-management decisions have contributed to our failure to replace toxic chemicals as our first method of choice. The author argues that we need to change our philosophy from eradication to control because we will not win the war. Winston has written a convincing and necessary book. Highly recommended for academic and public libraries.”—Library Journal

“Before you reach for the can of Raid, reach for this book. Mark Winston explains why our hopes of total victory in the war against pests are as mistaken as they are futile, and he provides a measured dose of common sense that should prevent many a hasty attack.”—Bill McKibben, author of Hope, Human and Wild: True Stories of Living Lightly on the Earth