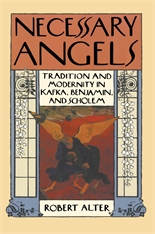 Tradition and Modernity in Kafka, Benjamin, and Scholem

In four elegant chapters, Robert Alter explains the prismlike radiance created by the association of three modern masters: Franz Kafka, Walter Benjamin, and Gershom Scholem. The volume pinpoints the intersections of these divergent witnesses to the modern condition of doubt, the no-man’s-land between traditional religion and modern secular culture.

Scholem, the devoted Zionist and master historian of Jewish mysticism, and Benjamin, the Marxist cultural critic, dedicated much of their thought and correspondence to Kafka, the explorer in fiction of radical alienation. Kafka’s sense of spiritual complexities was an inspiration to both thinkers in their resistance to the murderous simplification of totalitarian ideology. In Necessary Angels, Alter uncovers a moment when the future of modernism is revealed in its preoccupation with the past. The angel of the title is first Kafka’s: on June 25, 1914, the writer recorded in his diary a dream vision of an angel that turned into the painted wooden figurehead of a ship. In 1940, at the end of his life, Walter Benjamin devoted the ninth of his Theses on the Philosophy of History to a meditation on an angel by the artist Paul Klee, first quoting a poem he had written on that painting. In Benjamin’s vision, the figure from Klee becomes an angel of history, sucked into the future by the storm of progress, his face looking back to Eden. Benjamin bequeathed the Klee oil painting to Scholem; it hung in the living room of Scholem’s home on Abarbanel Street in Jerusalem until 1989, when his widow placed it in the Israel Museum.

Alter’s focus on the epiphanic force of memory on these three great modernists shows with sometimes startling, sometimes prophetic clarity that a complete break with tradition is not essential to modernism. Necessary Angels itself continues the necessary discovery of the future in the past.