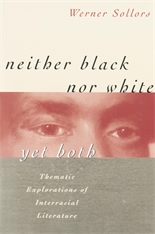 Neither Black nor White yet Both

“Sollors limns the discourse on race that dominated the world that each text entered, and presents what passed for ‘scientific’ knowledge at the time, thereby shedding light on the cultural work accomplished by each novel or poem. He also shows how the same basic stories have been retold by different writers, each reshaping and transforming the tale in light of the racial politics of his or her own time… Neither Black nor White yet Both, a stunning achievement, will be of interest to anyone who cares about race and culture.”—Shelley Fisher Fishkin, The University of Texas at Austin

“Any reader who thinks that novels, plays, and poetry devoted to the tragic mulatto, miscegenation, the code noir, passing, the curse of Ham, and other such themes constitute a mere subgenre in American culture will need to think again. Sollors proves, in voluminous detail, that the various William Faulkners and Nella Larsens now well know in academic circles rest on the vast, deep foundation of a national obsession.”—Eric Sundquist, Northwestern University