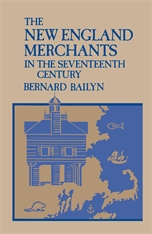 The New England Merchants in the Seventeenth Century

By the middle of the eighteenth century the merchants were dominant figures in the northern American colonies, powerful economically, politically, and socially. But in New England this preeminence had not been present in the first years of settlement; it had been achieved in the course of three generations of social development as the merchants often Puritans themselves, rose within the Bible Commonwealths to challenge the domination of the Puritan fathers.

In lively detail, Bernard Bailyn here presents the struggle of the merchants to achieve full social recognition as their successes in trade and in such industries as fishing and lumbering offered them avenues to power. Surveying the rise of merchant families, he offers a portrait in depth of the emergence of a new social group whose interests and changing social position powerfully affected the developing character of American society.

The story of this group is the story of people and of their many-sided interests. The merchants were united by the demands of their common devotion to trade, yet they did not form a socially homogeneous unit. In fact their social differences—created in the confusions and dislocations of the early days of settlement—came to play an important role in their business and political activities. Moreover, their commercial ventures, successes, and failures affected their social and political situation. Internationalists by occupation, they were deeply affected by personal relations with Europeans as well as by events in the Old World.

Drawing on source material from many fields—business records, religious and political data, literary remains, and genealogical information—Mr. Bailyn has discovered much that is new about the merchants, and has brought it all together into a composite portrait of our economic founding fathers that is fascinating in itself and that will reorient our thinking about many aspects of early New England history.