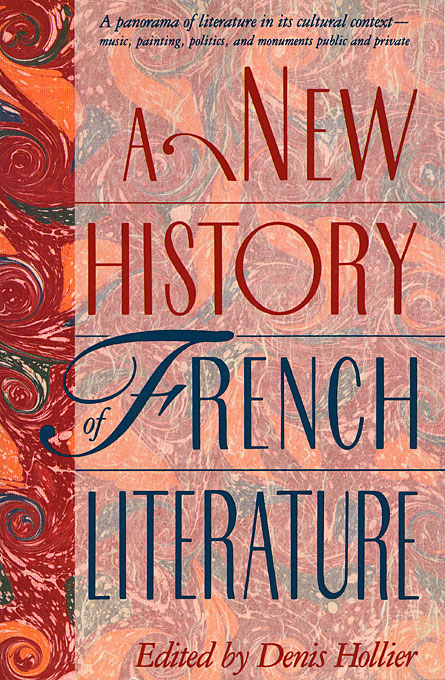 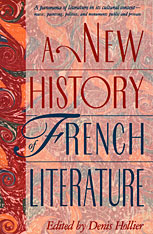 A New History of French Literature

Designed for the general reader, this splendid introduction to French literature from 842 A.D.—the date of the earliest surviving document in any Romance language—to the present decade is the most compact and imaginative single-volume guide available in English to the French literary tradition. In fact, no comparable work exists in either language. It is not the customary inventory of authors and titles but rather a collection of wide-angled views of historical and cultural phenomena. It sets before us writers, public figures, criminals, saints, and monarchs, as well as religious, cultural, and social revolutions. It gives us books, paintings, public monuments, even TV shows.

Written by 164 American and European specialists, the essays are introduced by date and arranged in chronological order, but here ends the book’s resemblance to the usual history of literature. Each date is followed by a headline evoking an event that indicates the chronological point of departure. Usually the event is literary—the publication of an original work, a journal, a translation, the first performance of a play, the death of an author—but some events are literary only in terms of their repercussions and resonances. Essays devoted to a genre exist alongside essays devoted to one book, institutions are presented side by side with literary movements, and large surveys appear next to detailed discussions of specific landmarks.

No article is limited to the “life and works” of a single author. Proust, for example, appears through various lenses: fleetingly, in 1701, apropos of Antoine Galland’s translation of The Thousand and One Nights; in 1898, in connection with the Dreyfus Affair; in 1905, on the occasion of the law on the separation of church and state; in 1911, in relation to Gide and their different treatments of homosexuality; and at his death in 1922.

Without attempting to cover every author, work, and cultural development since the Serments de Strasbourg in 842, this history succeeds in being both informative and critical about the more than 1,000 years it describes. The contributors offer us a chance to appreciate not only French culture but also the major critical positions in literary studies today. A New History of French Literature will be essential reading for all engaged in the study of French culture and for all who are interested in it. It is an authoritative, lively, and readable volume.