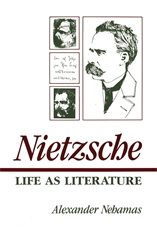 “This is the best and most important book on Nietzsche in English. Alexander Nehamas argues at a level of sophistication and provides a density of content which are very rare in this field.”—Michael Tanner, Times Literary Supplement

“This new study is fascinating for its portrayal of Nietzsche’s thought as ‘literary’ in a twofold sense: first, Nehamas argues that Nietzsche viewed the world as if it were a literary text; second, he claims that Nietzsche’s goal as an author was to create a specific literary character… The case is argued forcefully (and even with a touch of drama)… The writing is rich and allusive in a manner that is unusual in contemporary works of philosophy. It is a valuable contribution to our understanding of Nietzsche, one that adds substance to the often facile citing of Nietzsche in contemporary literary studies.”—Stephen N. Dunning, Poetics Today

“Anyone at all interested in Nietzsche will certainly want to read [this book]… Nehamas has applied his own theory of interpretation, and he has postulated an integrated, coherent ‘Nietzsche’ to whom no future reader of Nietzsche can remain indifferent.”—David Hoy, London Review of Books

“Nehamas evolves a wonderfully subtle and ingenious interpretation… [He has] produced something weighty, complex, distinctive—in its way, a work of art.”—George Scialabba, Village Voice Literary Supplement

“Philosophers and anyone interested in philosophy ought…to welcome Alexander Nehamas’s elegant and challenging interpretation of this most ‘writerly of philosophers’ …This unusually engaging book demands our attention.”—Karsten Harries, New York Times Book Review