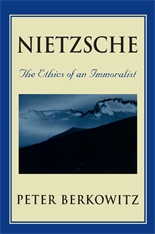 The Ethics of an Immoralist

“Here is an impressive and elegant exegesis of Nietzsche’s major works as a unified opus. Berkowitz advances an interpretation designed to pry Nietzsche from the grip of the post-modernists and to return him to a more traditional niche in political philosophy.”—Diana Coole, The Times Higher Education Supplement

“Nietzsche: The Ethics of an Immoralist is a brilliantly provocative meditation on Nietzsche as an ethical theorist committed to an account of the best life. In response to the heavy emphasis on Nietzsche’s philosophical radicalism in recent decades, Berkowitz emphasizes the extent to which Nietzsche actually embraces some of the traditional conceptions he purports to reject, especially with regard to truth, nature, and morality. Berkowitz also criticizes the standard practice of making arguments about Nietzsche’s thought on a given topic by ‘picking and choosing…cutting and pasting words, phrases, and ideas drawn from wherever they can be found in Nietzsche’s Collected Works’ without reference to context. Arguing that Nietzsche wanted his books to be read as unified wholes, he builds his discussion around an analysis of six texts considered one at a time… This is an important book. It is deliberately provocative, but the high quality of so many of its provocations makes it a must for those interested in Nietzschean ethics. Berkowitz conducts a highly intelligent war against familiar positions with arguments that are always thoughtful, often convincing, and addressed to important issues.”—Bruce Detwiler, American Political Science Review

“Superb… The Nietzsche that emerges from Berkowitz’s book is driven by a deep passion for the truth, his thought burning with a ‘conflict or contest of extremes’… The reward of [this] important book is to reveal to us how Nietzsche’s endeavor explores the limitations and terrible dangers of an all-too-human universe, a ‘city of man’ which flees from any constraints of a divine or natural origin.”—Brian C. Anderson, Crisis

“This book will stand as a needed corrective to common misconceptions about Nietzsche’s ethics and the beginning of what should prove to be a fruitful debate over its grounds and implications.”—R. Kevin Hill, Ethics

“Peter Berkowitz takes the field with a bold and intriguing new reading. Nietzsche: The Ethics of an Immoralist is at its best when it challenges those dogmatic pieties of postmodernists that threaten to contaminate serious inquiry… The interpretation that emerges from Berkowitz’s sensible and sensitive reading always commands respect and usually elicits agreement.”—Werner J. Dannhauser, First Things

“In Nietzsche: The Ethics of an Immoralist, Peter Berkowitz provides us with a rarity: a clear and sober reading of Nietzsche. This book exemplifies Nietzsche scholarship at its best. It presents Nietzsche as a philosopher rooted in the traditions of the West, and as a philosopher who writes coherent books, not incoherent aphorisms. Berkowitz demonstrates that Nietzsche is not a mere negative critic as some have thought, but the author of a positive ethics of creativity, albeit as an immoralist for his rejection of conventional morality… Nietzsche: The Ethics of an Immoralist is a welcome addition to the literature. Berkowitz presents a clear account of Nietzsche’s ethics, clarifies some of Nietzsche’s own confusion, and leaves the reader to consider the value of Nietzsche’s project.”—William Irwi, Journal of Value Inquiry

“Peter Berkowitz’s striking interpretation of Nietzsche calls into question the confident celebration of the death of God in the modern world. Berkowitz’s careful and probing reading shows that Nietzsche’s daring philosophizing both licenses the quest for absolute freedom and self-mastery and reveals the profound incoherence of such a quest. By showing that Nietzsche’s thought depends on traditional convictions about the virtues and an intelligible and objective moral order, Berkowitz forces us to rethink not only Nietzsche’s achievement but the very relation between ancient and modern philosophy.”—David Hartman, Shalom Hartman Institute and Hebrew University of Jerusalem

“A surprising amount of the most interesting moral and political philosophy published recently has taken the form of commentary on Nietzsche. Among such commentaries Peter Berkowitz’s book is outstanding. It enables us to read Nietzsche once again as he would want to have been read—as one who puts all convictions to the question—and in so doing puts Nietzsche himself to the question. Very few books achieve this combination of imaginative sympathy and radical criticism.”—Alasdair MacIntyre, University of Notre Dame

“Berkowitz rescues Nietzsche from his users and abusers, and restores the mysterious integrity of his work, which is lost in postmodern appropriations. He considers Nietzsche’s books as books, and by looking deeply, or with insight of his own, finds and judges what is there. This is a lively and most serious book on the philosopher of our time.”—Harvey C. Mansfield, Harvard University

“Berkowitz’s clearly argued and absorbing book has great strengths. It offers a salutary new emphasis in Nietzsche studies by restoring a perspective that takes Nietzsche’s search for truth seriously. It shows convincingly that Nietzsche should be understood as the propounder of a severe ethical vision. And its extended argument that Nietzsche’s thought represents a serious rebuke to a central modern and postmodern aspiration is sure to provoke a lively and enlightening debate.”—Charles Taylor, McGill University