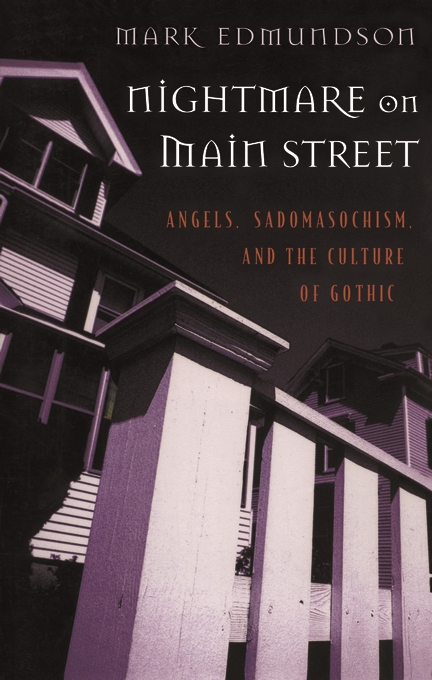 Angels, Sadomasochism, and the Culture of Gothic

Once we’ve terrified ourselves reading Anne Rice or Stephen King, watching Halloween or following the O. J. Simpson trial, we can rely on the comfort of our inner child or Robert Bly’s bongos, an angel, or even a crystal. In a brilliant assessment of American culture on the eve of the millennium, Mark Edmundson asks why we’re determined to be haunted, courting the Gothic at every turn—and, at the same time, committed to escape through any new scheme for ready-made transcendence.

Nightmare on Main Street depicts a culture suffused with the Gothic, not just in novels and films but even in the nonfictive realms of politics and academic theories, TV news and talk shows, various therapies, and discourses on AIDS and the environment. Gothic’s first wave, in the 1790s, reflected the truly terrifying events unfolding in revolutionary France. What, Edmundson asks, does the ascendancy of the Gothic in the 1990s tell us about our own day?

And what of another trend, seemingly unrelated—the widespread belief that re-creating oneself is as easy as making a wish? Looking at the world according to Forrest Gump, Edmundson shows how this parallel culture actually works reciprocally with the Gothic.

An unchecked fixation on the Gothic, Edmundson argues, would result in a culture of sadomasochism. Against such a rancorous and dispiriting possibility, he draws on the work of Nietzsche and Shelley, and on the recent creations of Toni Morrison and Tony Kushner, to show how the Gothic and the visionary can come together in persuasive and renovating ways.