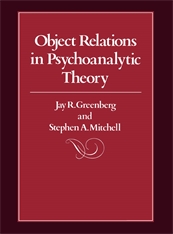 Object Relations in Psychoanalytic Theory provides a masterful overview of the central issue concerning psychoanalysts today: finding a way to deal in theoretical terms with the importance of the patient’s relationships with other people. Just as disturbed and distorted relationships lie at the core of the patient’s distress, so too does the relation between analyst and patient play a key role in the analytic process. All psychoanalytic theories recognize the clinical centrality of “object relations,” but much else about the concept is in dispute. In their groundbreaking exercise in comparative psychoanalysis, the authors offer a new way to understand the dramatic and confusing proliferation of approaches to object relations. The result is major clarification of the history of psychoanalysis and a reliable guide to the fundamental issues that unite and divide the field.

Jay Greenberg and Stephen Mitchell, both psychoanalysts in private practice in New York, locate much of the variation in the concept of object relations between two deeply divergent models of psychoanalysis: Freud’s model, in which relations with others are determined by the individual’s need to satisfy primary instinctual drives, and an alternative model, in which relationships are taken as primary. The authors then diagnose the history of disagreement about object relations as a product of competition between these disparate paradigms. Within this framework, Sullivan’s interpersonal psychiatry and the British tradition of object relations theory, led by Klein, Fairbairn, Winnicott, and Guntrip, are shown to be united by their rejection of significant aspects of Freud’s drive theory. In contrast, the American ego psychology of Hartmann, Jacobson, and Kernberg appears as an effort to enlarge the classical drive theory to accommodate information derived from the study of object relations.

Object Relations in Psychoanalytic Theory offers a conceptual map of the most difficult terrain in psychoanalysis and a history of its most complex disputes. In exploring the counterpoint between different psychoanalytic schools and traditions, it provides a synthetic perspective that is a major contribution to the advance of psychoanalytic thought.