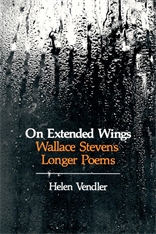 Though Wallace Stevens’ shorter poems are perhaps his best known, his longer poems, Helen Vendler suggests in this book, deserve equal fame and equal consideration. Stevens’ central theme—the worth of the imagination—remained with him all his life, and Mrs. Vendler therefore proposes that his development as a poet can best be seen, not in description—which must be repetitive—of the abstract bases of his work, but rather in a view of his changing styles.

The author presents here a chronological account of fourteen longer poems that span a thirty-year period, showing, through Stevens’ experiments in genre, diction, syntax, voice, imagery, and meter, the inventive variety of Stevens’s work in long forms, and providing at the same time a coherent reading of these difficult poems. She concludes, “Stevens was engaged in constant experimentation all his life in an attempt to find the appropriate vehicle for his expansive consciousness; he found it in his later long poems, which surpass in value the rest of his work.”