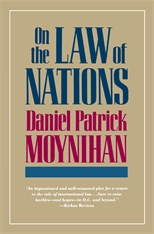 On the Law of Nations

Foreign Policy. “In the annals of forgetfulness there is nothing quite to compare with the fading from the American mind of the idea of the law of nations.”

Grenada. “We might have benefited from a weekend’s pause in which we could have considered our interests rather than merely giving in to our impulses.”

The mining of Nicaraguan harbors. “A practice of deception mutated into a policy of deceit.”

Iran–Contra. “The idea of international law had faded. But just as important, in the 1980s it had come to be associated with weaknesses in foreign policy. Real men did not cite Grotius.”

As the era of totalitarianism recedes, the time is at hand to ask by what rules we expect to conduct ourselves, Senator Daniel Patrick Moynihan writes in this pellucid, and often ironic, examination of international law. Our founding fathers had a firm grasp on the importance and centrality of such law; later presidents affirmed it and tried to establish international institutions based on such high principles; but we lost our way in the fog of the Cold War.

Moynihan’s exploration of American attitudes toward international law—those of presidents, senators, congressmen, public officials, and the public at large—reveals the abiding reverence for a law of nations and the attempts for almost two hundred years to make international law the centerpiece of foreign and strategic policy. Only in the last decade did a shift in values at the highest levels of government change the goals and conduct of the United States.

Displaying a firm grasp of history, informed by senatorial insights and investigative data, elegantly written, this book is a triumph of scholarship, interpretation, and insight.