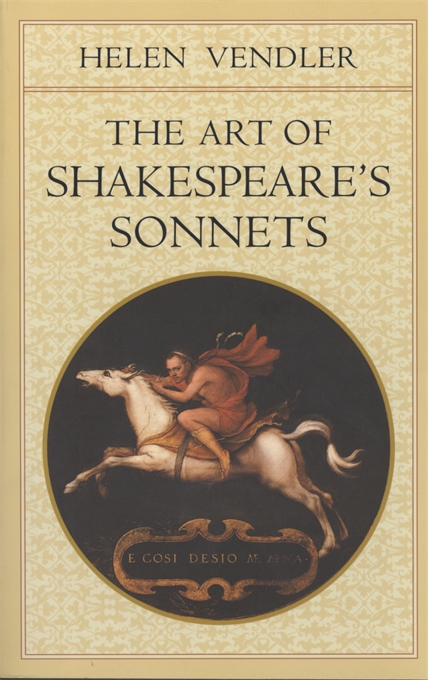 The Art of Shakespeare’s Sonnets

“This book is a great achievement, the work of an author with an almost devout passion for good poems, a passion that the academy has not succeeded in killing.”—Frank Kermode, The New Republic

“From time to time, a work of criticism appears that promises to inaugurate a new phase of the art… Roland Barthes, Paul de Man, Stephen Greenblatt: each heralded, in different ways, a paradigm shift in critical practice. And now Helen Vendler…makes a bold attempt to change criticism again. Her ambitious chef d’oeuvre, the fruit of decades of memorizing and meditating on Shakespeare’s Sonnets, significantly takes the form of a critical commentary… She has chosen her topic strategically. The Sonnets is the supreme lyric masterpiece in English, yet, although often edited, it has been neglected critically, as if too challenging and demanding, too dangerous for direct response. Yet Vendler’s originality goes further. For she has decided to return criticism to the study of art; to the sort of response that leads to appreciative evaluation rather than manipulation… The rapid adumbration of Shakespeare’s variety is as brilliant as anything Vendler has written. But in commenting on each individual sonnet in turn, she surpasses herself, again and again making fresh observations on poems we thought familiar. In almost any other critic this would be a tour de force. But in her it is simply honest empiricism, free from any agenda but that of being receptive.”—Alastair Fowler, The Times Literary Supplement

“The Art of Shakespeare’s Sonnets by Helen Vendler is a superb close reading of the sonnets one by one. It is also an invaluable master class on how to read a poem, how to attend to the patterns of sound within a poem, how to explore the way in which sense and sound combine in the sonnets.”—Colm Tóibín, The Times Literary Supplement

“Vendler has lived with these works all her life, and spent much of the past nine years working on this hefty book. The result is more than a reliable guide, it is a portable critical encyclopedia… In short, this is just the book for anybody wishing to spend a little quality time with our greatest poet.”—The Washington Post

“If you are a writer who still uses English words (rather than chockablock bricks of jargon), this is the book for you. Professor Vendler takes Shakespeare’s sonnets one by one and word by word. She talks about what poems do and how they do it—their architecture, narrative, music, and language—so, along with the aperçus and sharp insights, there are nifty charts and graphs.”—Dave Hickey, Artforum

“Helen Vendler…has produced here what is probably the least irrelevant and most critically illuminating of all extended commentaries on the Sonnets.”—John Bayley, The New York Review of Books

“Reading the sonnets knowing that Ms. Vendler is about to have her say serves to sharpen your awareness of the poetry considerably. In fact, with her reading over your shoulder, so to speak, you see deeper into the poetry than ever before. Each essay forces you to reread the sonnet under discussion and come a little closer to understanding this guy Shakespeare in the poem.”—Christopher Lehmann-Haupt, The New York Times

“Helen Vendler’s long study of the art of Shakespeare’s Sonnets is that purely aesthetic study of poetic language in action… Reading it is like being offered a huge plate of oysters, or doing a Spot-the-Ball competition, or playing obsessively with a Rubik’s Cube that always comes out right after the effort of following a tight technical argument… It is Vendler’s supreme critical virtue that she can write from inside a poem, as if she is in the workshop witnessing its making… Again and again, I want to haul out examples of this supreme critical imagination at work, but it should be apparent that criticism of the Sonnets, and by extension, critical accounts of poetry, will never be the same again. This is an epic, innovatory study which ought to mark a new beginning for criticism.”—Tom Paulin, London Review of Books

“This eagerly awaited work has been nine years coming, an understandable period considering the magnitude of Helen Vendler’s project… In her valuable introduction, Vendler declares that the sonnets represent ‘the largest tract of unexamined Shakespearean lines left open to scrutiny.’ Readers like me, who thought they were relatively familiar with these poems, will discover just how unfamiliar their various sequences turn out to be… It is consistent with Vendler’s total immersion in the sonnets that she has learned them all by heart, as an enabling means of support for the ‘evidential’ criticism—in which ‘instant and sufficient linguistic evidence’ is produced to back up every critical remark—she so unfailingly and brilliantly practices.”—William H. Pritchard, The Boston Sunday Globe

“Helen Vendler discloses, with great patience and ingenuity, how similarly adequate to the perceived splendor and urgency of the sonnets are their rhetorical conventions, devices that ‘work’ as multifariously for lyric poetry as the stage contrivances of the Elizabethan (and Jacobean) theater did for the plays… Vendler is confident that ‘the sonnets will remain intelligible, moving and beautiful to contemporary and future readers.’ They will, if such readers also read Vendler’s book. For hers is the most intricately inquiring and ingeniously responding study of these poems yet to be undertaken… Hers will prove to be the most valuable critical performance in recent American literature on classic texts… The Art of Shakespeare’s Sonnets is an authentic act of contemporary criticism as well as a reading of the most cherished lyric poetry in the English language. It constitutes a ground of poetic apprehension that cannot be gainsaid, and it offers the opportunity to enjoy the art of poetry where we all agree it must be found, as one enjoys most what one understands best.”—Richard Howard, The New York Times Book Review

“[The Art of Shakespeare’s Sonnets] adds enormously to our understanding and prods us to continue to make our own discoveries… [It] grafts new feathers onto the wings of our understanding, lifting us closer to Heaven’s gate, and it once more confirms Vendler’s status as one of the smartest critics around.”—Jay Ragoff, Books in Review

“[The Art of Shakespeare’s Sonnets is] a heady journey into the sounds, structures, and strategies of the sonnets, led by a guide as perceptive and rigorously instructive as one could wish for… Anyone glancing at just a few of the essays will benefit from Vendler’s microscopic examinations. To read the book from start to finish, however, is to receive a thorough education in how to look at a poem. One feels that when Shakespeare wrote the line, ‘A liquid prisoner pent in walls of glass,’ he hoped one day for a reader who would see in this image what Vendler sees: ‘the emotionally labile contents of any sonnet as they preserve their mobility within the transparent walls of prescribed length, meter, and rhyme.’ This outstanding work of criticism has made those walls and what lies behind them very clear.”—Robert Atwan, Boston Review

“There is so much more to these sonnets than meets the eye; Vendler’s insights into their poetics are more than useful: they are indispensable.”—Tom Mayo, The Dallas Morning News

“Vendler stresses Shakespeare’s hyperconsciousness as a writer, a quality she seems to share. She approaches her detailed study with the utter scrupulousness of a true scholar, explicating the poems as poems. Her strict emphasis on poetics and her thoroughness separate her study from its predecessors.”—Philippa Sheppard, The Globe & Mail

“A few pages of this marvelous study convince us that ‘no poet ever found more linguistic forms to replicate human responses than Shakespeare in the Sonnets.’”—The Guardian

“[A] magisterial work…[and] an invaluable contribution to the serious study of Shakespeare’s sonnets by a preeminent critic of lyric poetry, widely viewed as the best close reader of poetry writing today.”—Michael Shinagel, Harvard Review

“Though intricate and technical, Vendler’s analysis of the sonnets is never boring… Her meticulous structures of analysis are a gift: They quietly allow one’s own interpretive faculty to rise. By clearing up all the mechanical obstacles to understanding, your own apprehension of the poem emerges whole, and you’ve only to recognize it… Vendler’s myriad attentions to the minute patterning of words and sounds yield…mysterious glories. She diligently, even stringently, employs her technical surveys, and what emerges from beneath their grid is surprising, substantial, evanescent.”—Mona Simpson, The Los Angeles Times

“Vendler’s careful and sympathetic examination of the poems’ organizing principles (such as the ‘strategies of unfolding’ that Shakespeare uses to shift a sonnet’s emotional terrain, sometimes repeatedly, as the poem proceeds) yields surprising insights… Vendler proposes that her book serve as a supplement to annotated texts such as the Penguin and the Yale editions, but she is probably selling herself short. Her volume is fuller than the Penguin, and more inviting than Stephen Booth’s impressive but rather forbidding Yale edition. A reader who has never tried the sonnets in their entirety, or at least looked at them in college, would have no trouble with this engaging and enlightening edition.”—Gregory Feeley, The Philadelphia Inquirer

“Close readings that train a brilliant spotlight on Shakespeare’s poetic performance… A celebrated and prolific critic, reviewer, and lecturer on poetry, Vendler offers an illuminating companion for Bardolators of all levels and stripes… Vendler analyzes each sonnet in turn (they appear in both original and modernized formats), explicating in an accessible manner the structures that organize them… An immensely enriching account of Shakespeare’s complex verse: readings whose perspicuity and accuracy will form a solid basis for many more.”—Kirkus Reviews

“Vendler has created an exhaustive and wonderful work on Shakespeare’s sonnets… This study will become a standard work and is essential for all academic libraries.”—Teresa Berry, Library Journal

“With admirable self-reliance and hardly a glance at the main stream of historical and gender-studies criticism, the famed Harvard professor reads the poems pragmatically, as ‘verbal contraptions,’ explaining how and why they work the way they do. The result is not just a few brilliant perceptions about, say, Shakespeare’s use of clichés or chiasmus (although those are here), but the best teachers’ edition on the market. Vendler’s preface, and the essays that accompany each sonnet…will make a nearly perfect introduction for college students—or for anyone else who wants to learn how to read the poems for their skill and originality.”—Publishers Weekly