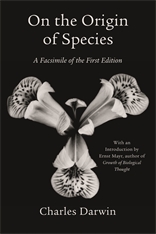 On the Origin of Species

A Facsimile of the First Edition

It is now fully recognized that the publication of Charles Darwin’s Origin of Species in 1859 brought about a revolution in man’s attitude toward life and his own place in the universe. This work is rightly regarded as one of the most important books ever published, and a knowledge of it should be part of the intellectual equipment of every educated person. The book remains surprisingly modern in its assertions and is also remarkably accessible to the layman, much more so than recent treatises necessarily encumbered with technical language and professional jargon.

This first edition had a freshness and uncompromising directness that were considerably weakened in later editions, and yet nearly all available reprints of the work are based on the greatly modified sixth edition of 1872. In the only other modern reprinting of the first edition, the pagination was changed, so that it is impossible to give page references to significant passages in the original. Clearly this facsimile reprint of the momentous first edition fills a need for scholars and general readers alike.

Ernst Mayr’s Introduction has a threefold purpose: to list passages in the first edition that Darwin altered in later editions; to point out instances in which Darwin was clearly pioneering; and to call attention to neglected passages that show Darwin as a much deeper thinker than has been recognized. No one can fail to be impressed by the originality of Darwin’s treatment and by the intellectual challenge his work presents even to the modern reader.