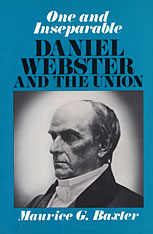 Daniel Webster and the Union

From the ratification of the Constitution to the outbreak of the Civil War, few persons played a greater role in American history than Daniel Webster. He was a spokesman of New England commercial interests in the War of 1812, approving the threat of state interposition by the Hartford Convention; later an apostle of the industrial system and advocate of protective tariffs; a brilliant expositor of the Constitution as an instrument for national economic growth and strong central government; the architect of a foreign policy that brought permanent peace between the United States and England; the Great Compromiser who, as much as any other public man, tried to reconcile the clashing interests of North and South.

Despite his importance Webster has never been the subject of a full-scale, scholarly biography. Maurice G. Baxter’s One and Inseparable traces the interrelated evolution of the public career and the private life of this imposing and controversial Yankee. He portrays Webster as an unswerving patriot, an advocate of nationality, and a champion of peace and the Union—but also reveals him as a self-promoting politician who varied his positions to suit the interests of his constituents and was sometimes insensitive to the great moral issues of his day. This devoted family man, enterprising if not altogether successful farmer, and genial companion could he egotistical, immoderate in his drinking habits, and careless about personal finances. Reading Baxter’s lucid, moving biography it is possible to understand why Ralph Waldo Emerson so detested Daniel Webster but also called him “the completest man” produced by America, adding: “Nature had not in our days, or not since Napoleon, cut out such a masterpiece.”