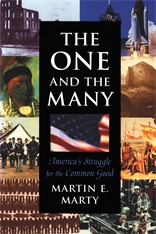 The One and the Many

America’s Struggle for the Common Good

E pluribus unum no longer holds. Out of the many have come as many claims and grievances, all at war with the idea of one nation undivided. The damage thus done to our national life, as too few Americans seek a common good, is Martin Marty’s concern. His book is an urgent call for repair and a personal testament toward resolution.

A world-renowned authority on religion and ethics in America, Marty gives a judicious account (itself a rarity and a relief in our day of uncivil discourse) of how the body politic has been torn between the imperative of one people, one voice, and the separate urgings of distinct identities--racial, ethnic, religious, gendered, ideological, economic. Foreseeing an utter deadlock in public life, with devastating consequences, if this continues, he envisions steps we might take to carry America past the new turbulence.

While the grand story of oneness eludes us (and probably always will), Marty reminds us that we do have a rich, ever-growing, and ever more inclusive repertory of myths, symbols, histories, and, most of all, stories on which to draw. He pictures these stories, with their diverse interpretations, as part of a conversation that crosses the boundaries of groups. Where argument polarizes and deafens, conversation is open ended, guided by questions, allowing for inventiveness, fair play, and dignity for all. It serves as a medium in Marty’s broader vision, which replaces the restrictive, difficult, and perhaps unattainable ideal of "community" with the looser, more workable idea of "association."

An "association of associations" is what Marty contemplates, and for the spirit and will to promote it he looks to eighteenth-century motifs of sentiment and affection, convergences of intellect and emotion that develop from shared experience. And as this book so eloquently reminds us, America, however diverse, is an experience we all share.