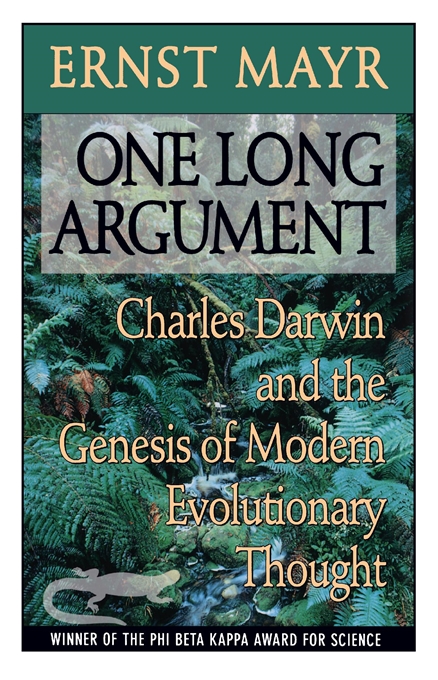 Charles Darwin and the Genesis of Modern Evolutionary Thought

Evolutionary theory ranks as one of the most powerful concepts of modern civilization. Its effects on our view of life have been wide and deep. One of the most world-shaking books ever published, Charles Darwin’s On the Origin of Species, first appeared in print over 130 years ago, and it touched off a debate that rages to this day.

Every modern evolutionist turns to Darwin’s work again and again. Current controversies in the life sciences very often have as their starting point some vagueness in Darwin’s writings or some question Darwin was unable to answer owing to the insufficient biological knowledge available during his time. Despite the intense study of Darwin’s life and work, however, many of us cannot explain his theories (he had several separate ones) and the evidence and reasoning behind them, nor do we appreciate the modifications of the Darwinian paradigm that have kept it viable throughout the twentieth century.

Who could elucidate the subtleties of Darwin’s thought and that of his contemporaries and intellectual heirs—A. R. Wallace, T. H. Huxley, August Weismann, Asa Gray—better than Ernst Mayr, a man considered by many to be the greatest evolutionist of the century? In this gem of historical scholarship, Mayr has achieved a remarkable distillation of Charles Darwin’s scientific thought and his enormous legacy to twentieth-century biology. Here we have an accessible account of the revolutionary ideas that Darwin thrust upon the world. Describing his treatise as “one long argument,” Darwin definitively refuted the belief in the divine creation of each individual species, establishing in its place the concept that all of life descended from a common ancestor. He proposed the idea that humans were not the special products of creation but evolved according to principles that operate everywhere else in the living world; he upset current notions of a perfectly designed, benign natural world and substituted in their place the concept of a struggle for survival; and he introduced probability, chance, and uniqueness into scientific discourse.

This is an important book for students, biologists, and general readers interested in the history of ideas—especially ideas that have radically altered our worldview. Here is a book by a grand master that spells out in simple terms the historical issues and presents the controversies in a manner that makes them understandable from a modern perspective.