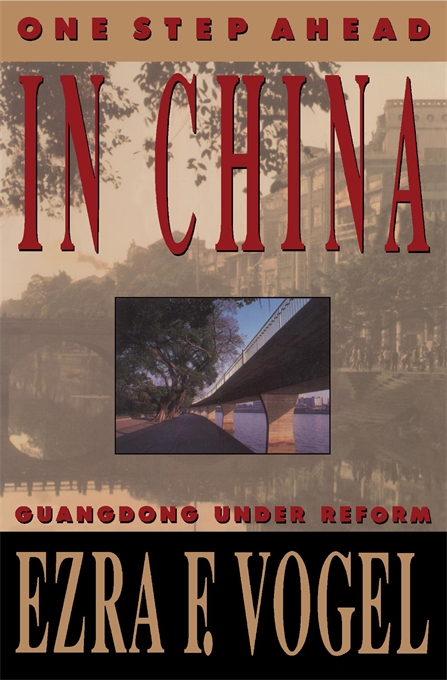 One Step Ahead in China

Sprawled along China’s southern coast near Hong Kong, Guangdong is the fastest growing and most envied region in the country. With sixty million people in an area the size of France, the province has been a fascinating laboratory for the transformation of a static socialist economy and social system. Reforms instituted in the late 1970s by Deng Xiaoping have allowed this area to look outward once again and to move “one step ahead” of the rest of China and the socialist world in introducing new political and economic policies. Why did the new strategy come about? What happened in the various parts of Guangdong during the first reform decade?

To answer these questions Ezra Vogel—one of the most widely respected observers of Asian economic and social development—returned to Guangdong, the subject of his award-winning book Canton under Communism, for eight months of fieldwork. The first Western scholar invited by a province to make such an extended visit, Vogel traveled to every prefecture in Guangdong and conducted hundreds of interviews to get a true picture of how post-Mao reforms are working. The result is a richly detailed study of a region on the cutting edge of socialist reform.

One Step Ahead in China is a groundbreaking book, unique in its detailed coverage of Guangdong, the first socialist dragon to follow in the path of South Korea and Taiwan. Vogel paints a vivid portrait of Guangdong’s accelerated development and surveys the special economic zones, the Pearl Delta, Guangzhou, and the more remote areas, including Hainan. He looks at the entrepreneurs and the role of the pervasive Chinese tradition of guanxi, in which friends and relatives of officials receive preferential treatment. He examines the problems of opening up a socialist system and places Guangdong in the context of the newly developing economies of East Asia.