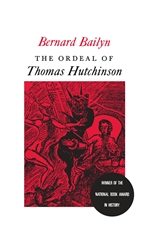 The Ordeal of Thomas Hutchinson

“This book,” Bernard Bailyn writes, “depicts the fortunes of a conservative in a time of radical upheaval and deals with problems of public disorder and ideological commitment.” It is at the same time a dramatic account of the origins of the American Revolution from the viewpoint, not of the winners who became the Founding Fathers, but of the losers, the Loyalists. By portraying the ordeal of the last civilian royal governor of Massachusetts, Mr. Bailyn explains “what the human reality was against which the victors struggled” and in doing so makes the story of the Revolution fuller and more comprehensible.