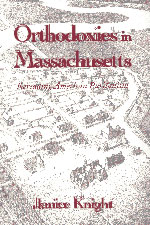 Reexamining religious culture in seventeenth-century New England, Janice Knight discovers a contest of rival factions within the Puritan orthodoxy. Arguing that two distinctive strains of Puritan piety emerged in England prior to the migration to America, Knight describes a split between rationalism and mysticism, between theologies based on God’s command and on God’s love. A strong countervoice, expressed by such American divines as John Cotton, John Davenport, and John Norton and the Englishmen Richard Sibbes and John Preston, articulated a theology rooted in Divine Benevolence rather than Almighty Power, substituting free testament for conditional covenant to describe God’s relationship to human beings.

Knight argues that the terms and content of orthodoxy itself were hotly contested in New England and that the dominance of rationalist preachers like Thomas Hooker and Peter Bulkeley has been overestimated by scholars. Establishing the English origins of the differences, Knight rereads the controversies of New England’s first decades as proof of a continuing conflict between the two religious ideologies. The Antinomian Controversy provides the focus for a new understanding of the volatile processes whereby orthodoxies are produced and contested. This book gives voice to this alternative piety within what is usually read as the univocal orthodoxy of New England, and shows the political, social, and literary implications of those differences.