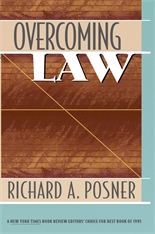 Legal theory must become more factual and empirical and less conceptual and polemical, Richard Posner argues in this wide-ranging new book. The topics covered include the structure and behavior of the legal profession; constitutional theory; gender, sex, and race theories; interdisciplinary approaches to law; the nature of legal reasoning; and legal pragmatism. Posner analyzes, in witty and passionate prose, schools of thought as different as social constructionism and institutional economics, and scholars and judges as different as Bruce Ackerman, Robert Bork, Ronald Dworkin, Catharine MacKinnon, Richard Rorty, and Patricia Williams. He also engages challenging issues in legal theory that range from the motivations and behavior of judges and the role of rhetoric and analogy in law to the rationale for privacy and blackmail law and the regulation of employment contracts. Although written by a sitting judge, the book does not avoid controversy; it contains frank appraisals of radical feminist and race theories, the behavior of the German and British judiciaries in wartime, and the excesses of social constructionist theories of sexual behavior.

Throughout, the book is unified by Posner’s distinctive stance, which is pragmatist in philosophy, economic in methodology, and liberal (in the sense of John Stuart Mill’s liberalism) in politics. Brilliantly written, eschewing jargon and technicalities, it will make a major contribution to the debate about the role of law in our society.