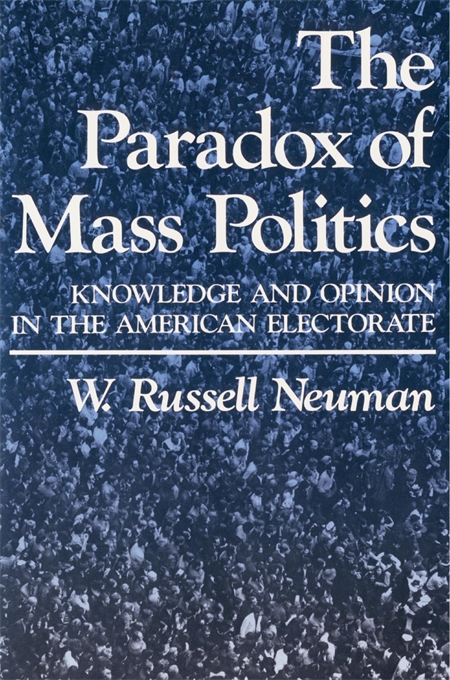 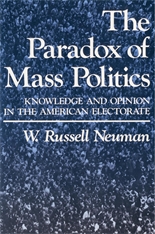 The Paradox of Mass Politics

Knowledge and Opinion in the American Electorate

A central current in the history of democratic politics is the tensions between the political culture of an informed citizenry and the potentially antidemocratic impulses of the larger mass of individuals who are only marginally involved in the political world. Given the public’s low level of political interest and knowledge, it is paradoxical that the democratic system works at all.

In The Paradox of Mass Politics W. Russell Neuman analyzes the major election surveys in the United States for the period 1948–1980 and develops for each a central index of political sophistication based on measures of political interest, knowledge, and style of political conceptualization. Taking a fresh look at the dramatic findings of public apathy and ignorance, he probes the process by which citizens acquire political knowledge and the impact of their knowledge on voting behavior.

The book challenges the commonly held view that politically oriented college-educated individuals have a sophisticated grasp of the fundamental political issues of the day and do not rely heavily on vague political symbolism and party identification in their electoral calculus. In their expression of political opinions and in the stability and coherence of those opinions over time, the more knowledgeable half of the population, Neuman concludes, is almost indistinguishable from the other half. This is, in effect, a second paradox closely related to the first.

In an attempt to resolve a major and persisting paradox of political theory, Neuman develops a model of three publics, which more accurately portrays the distribution of political knowledge and behavior in the mass population. He identifies a stratum of apoliticals, a large middle mass, and a politically sophisticated elite. The elite is so small (less than 5 percent) that the beliefs and behavior of its member are lost in the large random samples of national election surveys, but so active and articulate that its views are often equated with public opinion at large by the powers in Washington. The key to the paradox of mass politics is the activity of this tiny stratum of persons who follow political issues with care and expertise. This book is essential reading for concerned students of American politics, sociology, public opinion, and mass communication.