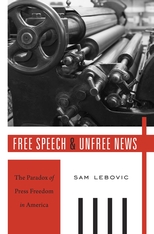 The Paradox of Press Freedom in America

Does America have a free press? Many who answer yes appeal to First Amendment protections that shield the press from government censorship. But in this comprehensive history of American press freedom as it has existed in theory, law, and practice, Sam Lebovic shows that, on its own, the right of free speech has been insufficient to guarantee a free press.

Lebovic recovers a vision of press freedom, prevalent in the mid-twentieth century, based on the idea of unfettered public access to accurate information. This “right to the news” responded to persistent worries about the quality and diversity of the information circulating in the nation’s news. Yet as the meaning of press freedom was contested in various arenas—Supreme Court cases on government censorship, efforts to regulate the corporate newspaper industry, the drafting of state secrecy and freedom of information laws, the unionization of journalists, and the rise of the New Journalism—Americans chose to define freedom of the press as nothing more than the right to publish without government censorship. The idea of a public right to all the news and information was abandoned, and is today largely forgotten.

Free Speech and Unfree News compels us to reexamine assumptions about what freedom of the press means in a democratic society—and helps us make better sense of the crises that beset the press in an age of aggressive corporate consolidation in media industries, an increasingly secretive national security state, and the daily newspaper’s continued decline.