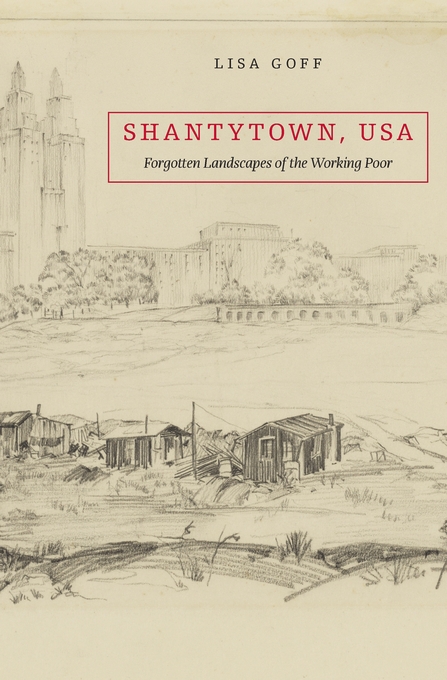 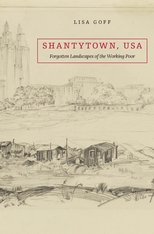 Forgotten Landscapes of the Working Poor

The word “shantytown” conjures images of crowded slums in developing nations. Though their history is largely forgotten, shantytowns were a prominent feature of one developing nation in particular: the United States. Lisa Goff restores shantytowns to the central place they once occupied in America’s urban landscape, showing how the basic but resourcefully constructed dwellings of America’s working poor were not merely the byproducts of economic hardship but potent assertions of self-reliance.

In the nineteenth century, poor workers built shantytowns across America’s frontiers and its booming industrial cities. Settlements covered large swaths of urban property, including a twenty-block stretch of Manhattan, much of Brooklyn’s waterfront, and present-day Dupont Circle in Washington, D.C. Names like Tinkersville and Hayti evoked the occupations and ethnicities of shantytown residents, who were most often European immigrants and African Americans. These inhabitants defended their civil rights and went to court to protect their property and resist eviction, claiming the benefits of middle-class citizenship without its bourgeois trappings.

Over time, middle-class contempt for shantytowns increased. When veterans erected an encampment near the U.S. Capitol in the 1930s President Hoover ordered the army to destroy it, thus inspiring the Depression-era slang “Hoovervilles.” Twentieth-century reforms in urban zoning and public housing, introduced as progressive efforts to provide better dwellings, curtailed the growth of shantytowns. Yet their legacy is still felt in sites of political activism, from shanties on college campuses protesting South African apartheid to the tent cities of Occupy Wall Street demonstrations.