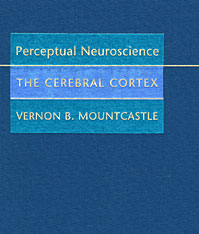 The cerebral cortex, occupying over 70 percent of our brain mass, is key to any understanding of the workings—and disorders—of the human brain. Offering a comprehensive account of the role of the cerebral cortex in perception, this monumental work by one of the world’s greatest living neuroscientists does nothing short of creating a new subdiscipline in the field: perceptual neuroscience.

For this undertaking, Vernon Mountcastle has gathered information from a vast number of sources reaching back through two centuries of investigation into the intrinsic operations of the cortex. His survey includes phylogenetic, comparative, and neuroanatomical studies of the neocortex; studies of the large-scale organization of the neocortex, of neuronal histogenesis and the specification of cortical areas, of synaptic transmission between neurons in cortical microcircuits, and of rhythmicity and synchronization in neocortical networks; and inquiries into the binding problem—how activities among the separate processing nodes of distributed systems coalesce in a coherent activity that we call perception.

The first book to summarize what is known about the physiology of the cortex in perception, Perceptual Neuroscience will be a landmark in the literature of neuroscience.