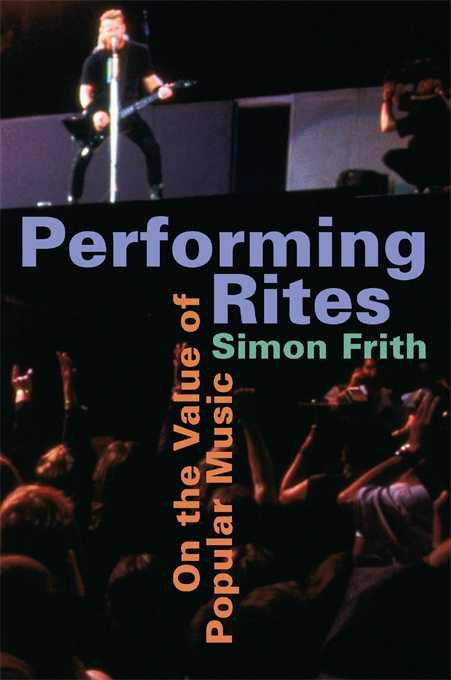 On the Value of Popular Music

“[Performing Rites is] quite simply one of the best books I’ve ever read about music. Any music.”—Nicholas Till, BBC Music

“This is a good, and arguably a great book. I’ve long been a bit of a Frith groupie, but with Performing Rites he suddenly becomes the object of that one genuine academic emotion: envy. For more than 25 years, Simon Frith has held three very different commitments in balance. As a journalist he has commented on pop for the quality papers with accuracy and wit… He is also an academic, trained in classical sociology…[and he] is a soixante-huitard, fundamentally affected by the explosion of sex, drugs and rock and roll that at the cusp of the 1960s turned into the grim whinings of political correctness… In Performing Rites, Frith…[brings these commitments] together into a magisterial work… This is a deeply learned book.”—Colin MacCabe, New Statesman & Society

“A learned, wide-ranging, often brilliant investigation of pop music aesthetics from a sociological perspective, and of pop music sociology from an aesthetic perspective… Performing Rites stages a dialectical encounter between the two professional and philosophical positions Frith has occupied, trying to arrive at a theory of pop music’s value that will do justice to both identities… The 13 chapters of Performing Rites develop a steady stream of provocative ideas, explicating them in the widest context of scholarly and journalistic explorations of popular culture… [T]his is an impressive and entertaining book, one that deserves crossover success among critics and listeners. Resoundingly discrediting the old saw that about tastes there is no disputing, [Frith] demonstrates how deeply the manner in which we dispute our tastes is bound up with our identities and our communities.”—Ivan Kreilkamp, Boston Review

“Frith grounds his sociology with a sound understanding of the way music works. It isn’t just that he knows and likes the Pet Shop Boys; he’s also learned enough to understand how modern performance practice reflects and refracts the aesthetic arguments of the last two centuries.”—J.D. Considine, The Baltimore Sun

“[Frith] dissolves the spurious distinction between ‘high’ and ‘pop’ culture with a wit and erudition that is all too rare among pontificators who seek to find the terminal decline of moral values behind every Madonna song. Pop music matters to Frith, and he gives one of the best accounts yet written of how and why this should be so… Frith is not afraid to venture into the demanding realms of ethnomusicology to support his arguments… [A] very necessary book.”—Peter Aspden, Financial Times

“[An] assumption-storming book about how and why we listen to popular music…[and an] eloquent and flawless case for pop music as a complex and multifaceted social event… Frith, a faultlessly astute and erudite critic and academician…manages to dismantle just about all of the most widely accepted paradigms and conventions of music theory and criticism.”—Geoff Pevere, The Globe & Mail

“The rock critic egghead volume of the year is British journalist-academic Simon Frith’s Performing Rites… [Frith’s] inquiries into the essential question of why we like what we like are almost always worth the trouble. And Frith is no high-culture snob. Any book that gives equal weight to Ned Rorem’s musings on the relative merits of Kierkegaard, Edith Piaf and Lana Turner, and impassioned letter writers to Metal Mania magazine is all right by me.”—The Philadelphia Inquirer

“[This book is] bursting with juicy morsels about the intersections (or lack thereof) among conversation, criticism, and academic analysis, as well as thoughts on the aesthetics of sound, the voice, the relationships between music and sex, and the artificial divide between high art and low, and a lot of ruminations on the social, intellectual, and emotional ways we listen to music… This book is less an academic analysis and more like a joyous pogo.”—Sarah Vowell, San Francisco Weekly

“Performing Rites is the most ambitious book I have ever read by a rock critic, and one of the best. A long-time rock record reviewer, trained as a sociologist, and now professor of English, Frith draws on autobiography, practical criticism, sociology, literary theory, musicology, ethnomusicology, music history, and philosophy to describe the social and aural dimensions that many kinds of music share. The result is a broadly synthetic way of describing music in context, one that sociologists, cultural theorists, and practical critics might all use.”—Stephen Burt, Transition

“Frith makes it safe to wade back into the critical pool; in fact, he reaffirms the necessity of lucid, enthusiastic criticism. He’s an academic (professor of English at Strathclyde University) and a working critic, so his taste for annoying academician’s lingo (bloody ‘discourse’ everywhere you look) is tempered by a sense of how this stuff plays in the real world. He’s also an unapologetic music fan, and Performing Rites functions in all three capacities… Frith’s refreshing exploration…gives every reason in the world why music can be called ‘good,’ and agrees that the best reason is because you like it.”—Arion Berger, The Washington City Paper

“[Frith suggests that] since in the era of mass reproducibility all music is potentially popular music, talk about music is a key component of a popular aesthetic, and any music that can be heard particularly to recognize and encourage that talk becomes (a) pop music… If you agree with Frith that this process is wonderful in its circularity, then you must read Performing Rites. If you think of such circularity as less than wonderful…you should still read Frith’s book…for the frustrations—and consequently the arguments—it is likely to cause are mostly provocative and productive ones… Paramount among Performing Rites’ strengths is its synthesizing, connective work. Frith casts a wide interdisciplinary net across a number of fields—sociology, anthropology, ethnomusicology, musicology, literary studies, cultural history and studies, and philosophy—and succeeds in drawing out a number of useful and illuminating parallels and intersections.”—Arthur Knight, American Music

“This work is a tour de force on the aesthetics of popular music, marked by an encyclopedic breadth of data and discussion… It is astonishing in its breadth, its clarity, and its implications… In short, to read this book will forever change the way one listens to music.”—Timothy J. Ralston, Bibliotheca Sacra

“[Performing Rites is] an innovative, virtuosic and important book. Frith has succeeded in organizing a huge terrain and makes valuable contributions to some of the most pressing current debates on popular music studies… I was rewarded with insights and clarifications that will be of continuing value in my own work. For every passage that I had time to mention in this review, there are at least three of equal merit and interest… Perhaps the best indication of the importance of this book is that now, after filling the space available to me, I have a strong desire to keep writing, to keep discussing the many avenues that Frith has opened up. If others find Performing Rites as provocative and rich as I have, then it is sure to become a key text in popular music studies.”—William Echard, Journal of Musicological Research

“An engaging exploration of the meanings, overt and hidden, of popular music.”—Booklist

“Frith…is the kind of scholar the best rock and roll deserves—a true fan first, a critic/cultural commentator later. Like his American counterpart, Greil Marcus…Frith’s ideas are always important: What values justify ‘high’ and ‘low’ art? What mandates the various ‘genres’ of pop music? What role does technology play in our appreciation of the music we hear? These and the other high-minded questions Frith examines don’t necessarily find their final answer here, but the process is more fulfilling than the slick music magazines flooding the newsstand. Nowhere among his discussions of aesthetics does he offer answers about what it will be hip to listen to next week, but Frith’s socio-philosophical quarrel with history about the value of pop music and popular culture more than earns its place among the growing canon of worthwhile pop culture texts.”—Publishers Weekly

“Frith’s book is bound to make a splash not least because it summarizes enormous amounts of related research, and pushes hard against the boundaries of popular music study’s dominant paradigms. In essence, Frith outlines a discourse network through which a popular musical aesthetic acts as a mediating force in music’s production, performance, and consumption. He investigates culturally loaded critical language and its effects—the discourses surrounding ‘authenticity,’ ‘originality,’ ‘creativity,’ ‘good and bad.’”—Richard D. Leppert, University of Minnesota

“This is Simon Frith’s long-awaited book about value and popular aesthetics. He starts off from a sociologist’s assumptions about musical taste—that taste is socially formed—and moves toward a theory of popular aesthetics where value judgments carry enough ethical weight to serve as shapers of community and individual identity. Aside from the book’s valuable and controversial arguments with cultural studies, it is a courageous model of what to do with sociology itself. In making social observation the basis for aesthetic inquiry, it takes the kind of risks that are rarely found in the field of sociology of culture. To say that Frith’s approach is interdisciplinary is prosaic. His command of musicology, discography, cultural theory, journalistic savoir-faire, and political pragmatism provides a blend of the scholarly and idiosyncratic that is quite unique, even in a field as eclectic as cultural studies.”—Andrew Ross, New York University