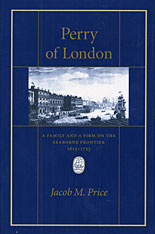 The Establishment of English colonies in North America and the West Indies in the seventeenth century opened new opportunities for trade. Conspicuous among the families who used these opportunities to gain mercantile and social importance was the Perry family of Devon, who created Perry and Lane, by the end of the century the most important London firm trading to the Chesapeake and other parts of North America.

Jacob Price traces the family from Devon to Spain, Ireland, Scotland, the Chesapeake, New England, and London. He describes their relationships with Chesapeake society, from the Byrds and Carters to humble planters. In London, the firm’s patronage gave the family high standing among fellow businessmen, a position the founder’s grandson utilized to become a member of Parliament and Lord Mayor of London. In the end, the grandson’s political success as an antiministerialist brought the family the enmity of the prime minister, Sir Robert Walpole, and contributed to the downfall of their firm.

The Perrys’ story reveals the interrelatedness of social, commercial, and political history. It offers an important contribution to our understanding of the nature of the Chesapeake trade and the forces shaping the success and failure of English mercantile enterprise in the seventeenth and eighteenth centuries.