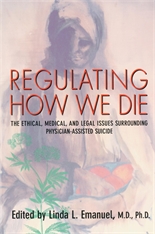 Regulating How We Die

The Supreme Court has ruled that states may prohibit physician-assisted suicide. Expressing the views of his fellow justices, Chief Justice Rehnquist wrote, “Americans are engaged in an earnest and profound debate about the morality, legality, and practicality of physician-assisted suicide. Our holding permits this debate to continue.” Regulating How We Die is certain to be a landmark contribution to that debate.

Dr. Linda Emanuel—one of America’s most influential medical ethicists—has assembled leading experts to provide not only a clear account of the arguments for and against physician-assisted suicide and euthanasia but also historical, empirical, and legal perspectives on this complicated issue. These contributors include Marcia Angell, George Annas, Susan Wolf, and many others.