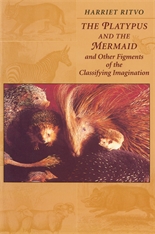 The Platypus and the Mermaid

And Other Figments of the Classifying Imagination

“Like a dim sum restaurant, The Platypus and the Mermaid offers an enormous variety of tidbits… The reviews in the world’s two leading weeklies of science both agreed…that [Ritvo’s] is an entertaining and enormously informative book. I can only join the chorus.”—Herman Reichenbach, International Zoo News

“Ritvo’s is an insightful look at the development of English zoology and its strong ties to cultural context.”—Library Journal

“In The Platypus and the Mermaid, Harriet Ritvo explores some of the motives, reasonable and otherside, underlying British classifications of animals in the eighteenth and nineteenth centuries… Anybody who reads it will be fascinated by all the curiosities Ritvo has assembled… [Her] book is worth reading for its erudition and charm and for her perceptive observations on the social and political motives embedded in the scientific doctrines she surveys.”—Matt Cartmill, Natural History

“Harriet Ritvo’s theme is classification, but in the vernacular tradition rather than the classically biological. Her knowledge is prodigious, and she is not afraid to speak out on arcane topics… Ritvo has written an authoritative and compelling book filled with often bizarre and sometimes macabre accounts of how humans divide up their world. Every statement and quotation has full references in the end notes to the pages and her erudition should make this an essential classic for all those interested in the wider issues of taxonomy.”—Juliet Clutton-Brock, New Scientist

“[Ritvo’s] learning is wide and unusual, her book a bran tub stuffed with obscure authors and diverse beliefs, where science mingles with prejudice, and sense with silliness… The huge range of out-of-the-way evidence that Ritvo brings to bear on her theme is impressive and absorbing… [The book] explores the fascinating question of how far we shape language to fit our behavior and how far language shapes us.”—Richard Jenkyns, The New York Review of Books

“[An] engaging, offbeat book… The Platypus and the Mermaid is a study of a wide range of classificatory practices in Britain in the 18th and 19th centuries, and Ritvo is particularly interested in the interplay between learned and popular writing… I have thoroughly enjoyed Ritvo’s entertaining and informative tour of both the highroads and the hedgerows of natural history.”—Stefan Collini, The New York Times Book Review

“Ritvo’s study of 18th- and 19th- century British taxonomic practices is premised on the belief—repeatedly espoused by anthropologists—that classification of important objects such as animals can reveal as much about the classifiers as about the classified. The way we order the world reflects how we think about it… This book provides an extremely rich and detailed collection of vignettes illustrating the many ways that Victorian thought of animals, making for thought-provoking and entertaining reading.”—Sherrie Lyons, Science

“[An] entertaining and often hilarious story of how 19th-century scientists and philosophers tried to come to terms with the complex problem of classifying living things… The subject is of enduring interest and the book is the first I have encountered that deals with it so thoroughly and accurately.”—Harry Miller, Times Higher Education Supplement

“This racy, erudite study of eighteenth- and nineteenth-century taxonomy reminds us that classification reveals at least as much about the classifiers as the classified. Moving deftly from the practice and language of science towards popular attitudes, The Platypus and the Mermaid takes on hybrids, monsters, freaks and culinary choice… [It] offers a highly entertaining account of the interactions of science and culture [and] is a compelling reminder of the politics and prejudice that fired the classifying imagination.”—Angelique Richardson, The Times Literary Supplement