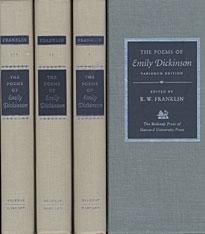 Emily Dickinson, poet of the interior life, imagined words/swords, hurling barbed syllables/piercing. Nothing about her adult appearance or habitation revealed such a militant soul. Only poems, written quietly in a room of her own, often hand-stitched in small volumes, then hidden in a desk drawer, revealed her true self. She did not live in time, as did that other great poet of the day, Walt Whitman, but in universals. As she knowingly put it: “There is one thing to be grateful for—that one is one’s self and not somebody else.”

Dickinson lived and died without fame: she saw only a few poems published. Her great legacy was later rescued from her desk drawer—an astonishing body of work revealing her acute, sensitive nature reaching out boldly from self-referral to a wider, imagined world. Her family sought publication of Dickinson’s poetry over the years, selecting verses, often altering her words or her punctuation, until, in 1955, the first important attempt was made to collect and publish Dickinson’s work, edited by Thomas H. Johnson for the Belknap Press of Harvard University Press.

Now, after many years of preparation by Ralph W. Franklin, the foremost scholar of Dickinson’s manuscripts, a new comprehensive edition is available. This three-volume work contains 1,789 poems, the largest number ever assembled. The poems, arranged chronologically, based on new dating, are drawn from a range of archives, most frequently from holographs, but also from various secondary sources representing lost manuscripts. The text of each manuscript is rendered individually, including, within the capacity of standard type, Dickinson’s spelling, capitalization, and punctuation. Franklin gives Dickinson’s alternative readings for the poems, her revisions, and the line and page, or column, divisions in the source. Each entry identifies Franklin’s editorial emendations and records the publication history, including variants. Fourteen appendices of tables and lists give additional information, including poems attributed to Emily Dickinson. The poems are indexed by numbers from the Johnson edition, as well as by first lines.

Franklin has provided an introduction that serves as a guide to this edition and surveys the history of the editing of Dickinson’s poems. His account of how Dickinson conducted her workshop is a reconstruction of a remarkable poetic life.