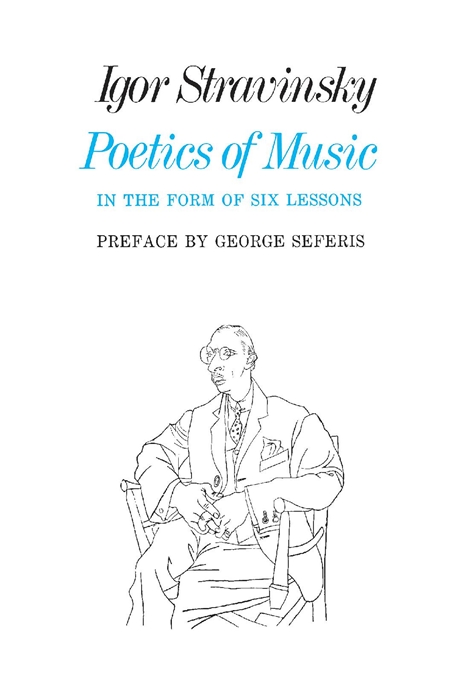 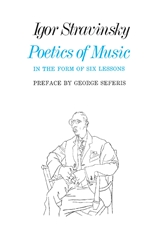 Poetics of Music in the Form of Six Lessons

Preface by George A. Seferis

“Some good (and some specious) phrases from one of music’s finest phrase-makers; a fascinating and sporadically valuable attempt to come to grips with the metaphysics of music; and a rich assortment of historical aperçus. More than that, it is, of course, an intimate profession of faith revealing the detailed ideological context of the music; it is also the source of that unforgettable advice to the violinists: “It is ill becoming when playing, to spread one’s legs too far apart.” During the academic year 1939-1940, Stravinsky delivered the Charles Eliot Norton Lectures at Harvard. He spoke in French. An English translation appeared in 1947, and now this bilingual edition enables the reader to study both the language in which Stravinsky conceived his “lessons” and the excellent English translation...printed on the facing pages...The six lectures that make up Poetics take the form of an “explanation of music”...[The book] remains a quintessence of Stravinsky’s reactions to the phenomenon of music. Poetics of Music offers the most coherent statement of the unchanging values behind Stravinsky’s many apparent shifts of manner: his insistence, for example, that music should be a revelation of a higher order to be faithfully executed by the performer, rather than a medium of self-expression to be interpreted. Above all, the composer must submit to rules, no matter how arbitrary, for “the more constraints one imposes, the more one frees one’s self of the chains that shackle the spirit.””—G. W. Hopkins, Musical Times

“[These lessons] provide penetrating glimpses into the thought processes of Stravinsky’s mind. While dealing with his chosen topics—the phenomenon of music, the composition of music, musical typology, the avatars of Russian music, and the performance of music—he reveals his reverence for tradition, order and discipline. He believes “the more art is controlled, limited, worked over, the more it is free.” His opinions about Wagner, Verdi, Berlioz, Hindemith, Weber, Beethoven, Glinka, Tchaikovsky, Moussorgsky and Bach are refreshing. He also analyzes the function of the critic, the requirements of the interpreter, the state of Russian music, and musical taste and snobbery.”—The American Recorder