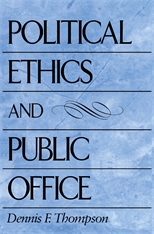 Are public officials morally justified in threatening violence, engaging in deception, or forcing citizens to act for their own good? Can individual officials be held morally accountable for the wrongs that governments commit? Dennis Thompson addresses these questions by developing a conception of political ethics that respects the demands of both morality and politics. He criticizes conventional conceptions for failing to appreciate the difference democracy makes, and for ascribing responsibility only to isolated leaders or to impersonal organizations. His book seeks to recapture the sense that men and women, acting for us and together with us in a democratic process, make the moral choices that govern our public life.

Thompson surveys ethical conflicts of public officials over a range of political issues, including nuclear deterrence, foreign intervention, undercover investigation, bureaucratic negligence, campaign finance, the privacy of officials, health care, welfare paternalism, drug and safety regulation, and social experimentation. He views these conflicts from the perspectives of many different kinds of public officials—elected and appointed executives at several levels of government, administrators, judges, legislators, governmental advisers, and even doctors, lawyers, social workers, and journalists whose professional roles often thrust them into public life.

In clarifying the ethical problems faced by officials, Thompson combines theoretical analysis with practical prescription, and begins to define a field of inquiry for which many have said there is a need but to which few have yet contributed. Philosophers, political scientists, policy analysts, sociologists, lawyers, and other professionals interested in ethics in government will gain insight from this book.