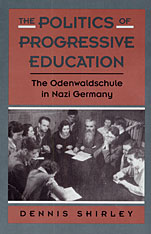 The Politics of Progressive Education

The Odenwaldschule in Nazi Germany

In March 1933, Nazi storm troopers seized control of the Odenwaldschule, a small German boarding school near Heidelberg. Founded in 1910 by educational reformer Paul Geheeb, the Odenwaldschule was a crown jewel of the progressive education movement, renowned for its emancipatory pedagogical innovations and sweeping curricular reforms. In the tumultuous year that followed that fateful spring, Geheeb moved from an initial effort to accommodate Nazi reforms to an active opposition to the Third Reich’s transformation of the school. Convinced at last that humanistic education was all but impossible under the new regime, he emigrated to Switzerland in March 1934. There he opened a new school, the Ecole d’Humanité, which became a haven for children escaping the horrors of World War II.

In this intimate chronicle of the collision between a progressive educator and fascist ideology during Hitler’s rise to power, Dennis Shirley explores how Nazi school reforms catalyzed Geheeb’s alienation from the regime and galvanized his determination to close the school and leave Germany. Drawing on a wealth of unpublished documents, such as Geheeb’s exhaustive correspondence with government officials and transcripts of combative faculty meetings, Shirley is able to reconstruct in detail the entire drama as it unfolded. Others have examined the intellectual antecedents of Nazism and the regime’s success at developing themes from popular culture for its political purposes; Shirley goes further by analyzing the many ways in which German educators could and did respond to Nazi reforms. In the process he identifies the myriad forces that led individuals to accept or resist the regime’s transformation of education.

The Politics of Progressive Education offers a richly rewarding examination of how education in general, and progressive education in particular, fared in the turbulent political currents of Nazi Germany. It brings to light a remarkable story, hitherto untold, of one individual’s successful attempt to uphold humanistic values in the darkest of circumstances.