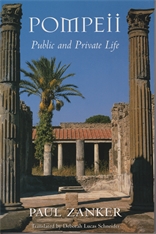 Pompeii’s tragedy is our windfall: an ancient city fully preserved, its urban design and domestic styles speaking across the ages. This richly illustrated book conducts us through the captured wonders of Pompeii, evoking at every turn the life of the city as it was 2,000 years ago.

When Vesuvius erupted in 79 A.D. its lava preserved not only the Pompeii of that time but a palimpsest of the city’s history, visible traces of the different societies of Pompeii’s past. Paul Zanker, a noted authority on Roman art and architecture, disentangles these tantalizing traces to show us the urban images that marked Pompeii’s development from country town to Roman imperial city. Exploring Pompeii’s public buildings, its streets and gathering places, we witness the impact of religious changes, the renovation of theaters and expansion of athletic facilities, and the influence of elite families on the city’s appearance. Through these stages, Zanker adeptly conjures a sense of the political and social meanings in urban planning and public architecture.

The private houses of Pompeii prove equally eloquent, their layout, decor, and architectural detail speaking volumes about the life, taste, and desires of their owners. At home or in public, at work or at ease, these Pompeians and their world come alive in Zanker’s masterly rendering. A provocative and original reading of material culture, his work is an incomparable introduction to urban life in antiquity.