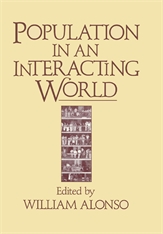 Population in an Interacting World

The earth’s five billion people are linked in a complex web that serves to shape population movements and patterns of births and deaths. In this book, nine experts illuminate the nature of this interplay linking rich and poor countries.

The demographic experience of each nation occurs in a larger context of social, political, economic, cultural, religious, military, and biological forces. On the premise that local population trends cannot be understood apart from such structural and historical factors, the book explores both the highly visible and the more subtle forms of demographic interplay, from the large recent flows of migrants and refugees to smaller yet still important flows such as those of tourists and governments-in-exile, from international shifts in the terms of trade to international programs of population control. It examines the historical roots and contemporary trends of these developments and probes their likely future courses.

The distinguished contributors present here some of the best writing to date on the topic: William H. McNeill on population flows in premodern times, Orlando Patterson on interactions in the West Atlantic region, the late Hedley Bull on the relation between migration and present world structure, Aristide R. Zolberg on guestworker programs, Juergen B. Donges on trade policies and economic migration, William Alonso on changing definitions of the identity of populations, Hans-Joachim Hoffmann-Nowotny on social and cultural dilemmas facing northern Europe, Francis X. Sutton on government policy issues, Myron Weiner on emigration and Third World development. Also discussed are the effects of medical advances on population growth, the implications of differing fertility rates, and the impact of the post-1945 transition from colonial empires to nation-states.

Too often such issues have been treated in disconnected fashion and viewed only as problems of the moment. As this outstanding book shows, they are richly intertwined, both with one another and with the history of world development.