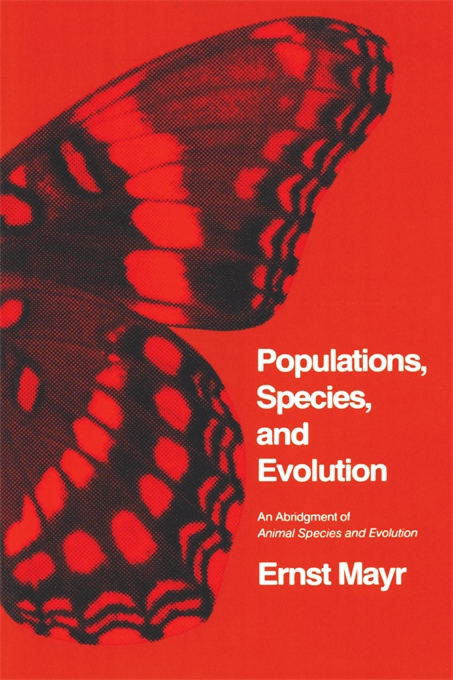 An Abridgment of Animal Species and Evolution

Representative of the international acclaim accorded Ernst Mayr’s Animal Species and Evolution, published in 1963, is Sir Julian Huxley’s description of it as “a magistral book…certainly the most important study of evolution that has appeared in many years—perhaps since the publication of The Origin of Species.” In his extraordinary book, Mayr fully explored, synthesized, and evaluated man’s knowledge about the nature of animal species and the part they play in the process of evolution.

In this long-awaited abridged edition, Mayr’s definitive work is made available to the interested nonspecialist, the college student, and the general reader. The author has retained the dominant themes of his original study—themes now more widely accepted than they were in 1963: the species is the most important unit of evolution; individuals (and not genes) are the targets of natural selection, hence the fitness of “a” gene is a nebulous if not misleading concept; and the most important genetic phenomena in species are species-specific regulatory systems that give species internal cohesion.

Each of the twenty chapters of the original edition has been revised; six have been extensively reworked. Discussions of peripheral subjects and massive citations of the literature have been eliminated, but the glossary has been greatly expanded. The focal point of the volume is, naturally, the species—a reproductively isolated aggregate of interbreeding populations. Presenting an overview of evolutionary biology in Chapter 1, Mayr then considers the nature of species, their population structure, their biological interactions, the multiplication of species, and their role in evolution.

Because of the impossibility of experimenting with man and because an understanding of man’s biology is indispensable for safeguarding his future, emphasis throughout the book is placed on those findings from higher animals which are directly applicable to man. The last chapter, “Man as a Biological Species,” is of particular interest to the general reader. Mayr concludes that while modern man appears to be as well adapted for survival purposes as were his ancestors, there is much evidence to suggest that he is threatened by the loss of his most typically human characteristics.