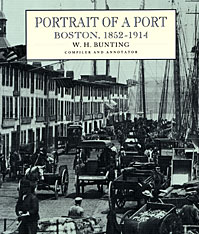 Portrait of a Port

Two hundred and thirty-four striking photographs of the port of Boston combine with interpretive commentary to recapture the flavor, buoyancy, and excitement of the city’s years as one of the two or three great American ports. After the Civil War Boston underwent a radical and successful transformation from a declining mercantile home port to an important and competitive modern seaport. At the same time the transition from sail to steam was taking place. Photographic studies of deep water sail and steam vessels, naval ships, fishing boats, catboats, tugs, schooners, and sloops, and of the picturesque wharves—all create a kaleidoscopic visual history of these years of change.

The volume offers, as well, some of the most distinguished early work in photography, including the widest selection ever published of photographs by pioneer marine photographer Nathaniel Stebbins.