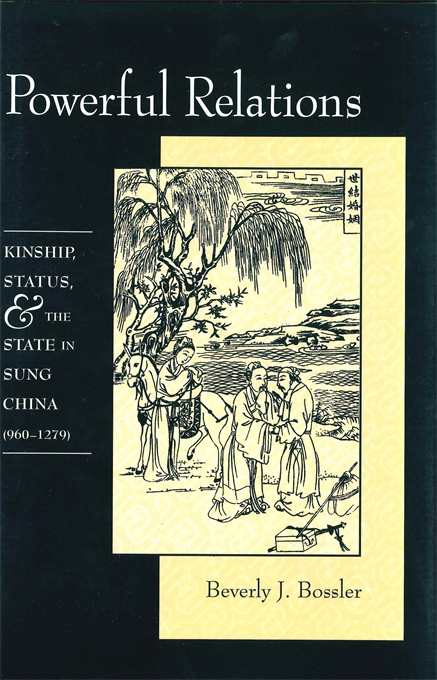 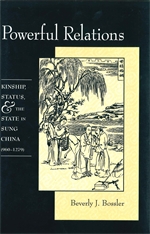 “Beverly J. Bossler’s study of the marriage and kinship practices of grand councilors and the Wu-chou local elite falls within the scope of the social history of China in the seventh to thirteenth centuries. Largely relying on privately commissioned funerary inscriptions of mostly men and some women, Bossler marshals ample documentary evidence to confirm an important theme in current scholarship: the transformation and expansion of the educated class from aristocratic pedigree to the political elite, whose survival depended on success in the civil service examinations, local economic clout, property base, and marriage alliances...The author’s contribution lies in providing informative marriage data from screening the large number of funerary inscriptions, the data confirms that marriage was ‘an integrating force in society’ and that public office has a close connection to social and financial status.”—Jennifer W. Jay, American Historical Review

“The title here is telling: ‘relations’ is mostly about relatives—the bonds of kinship and marriage among the upper classes of the Sung dynasty and its implications for our understanding of society and polity. An impressive level of industriousness is reflected in the canvassing of widely scattered and difficult to read primary sources, but the author’s astute analysis of those sources is even more impressive, as she steers her own course through some difficult academic terrain.”—Richard L. Davis, Bulletin of the School of Oriental and African Studies [UK]

“Documenting the interaction among kinship, social status, and bureaucratic position in both Northern and Southern Sung China, Beverly Bossler’s book, a revision of her 1991 dissertation, makes an important contribution to continuing debate on the nature of the Sung elite. This debate has ramifications well beyond the boundaries of Sung studies since, as Bossler states, the social order established during the Sung ‘set the pattern for Chinese society throughout much of the later imperial period.’ By carefully examining biographical data on two groups—men who held high-ranking offices at the Sung court and men who were locally prominent but had little or no involvement in the bureaucracy—Bossler sets out to test and refine a reigning paradigm of Sung social history...The picture that comes into sharper focus with Bossler’s study is one in which the rise of a family—even within a single generation—could be due to the actions of one or two individuals. In this enterprise especially, she succeeds in conveying the ’very human stories’ she seeks to tell.”—Linda Walton, Journal of Asian Studies

“Bossler’s study of Sung social history is based on an analysis of the funerary inscriptions of northern Sung families that produced men who, as grand councilors, reached the pinnacle of political success, and on locally prominent people, mostly southern Sung, from Wu-chou (in modern Chekiang)...Meticulously documented and extensively annotated, this book deeply engages current scholarship and illuminates issues also of significance to students of later periods.”—C. Schirokauer, Choice