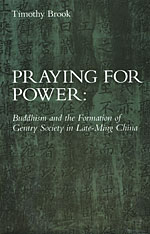 Buddhism and the Formation of Gentry Society in Late-Ming China

In seventeenth- and eighteenth-century China, Buddhists and Confucians alike flooded local Buddhist monasteries with donations. As gentry numbers grew faster than the imperial bureaucracy, traditional Confucian careers were closed to many; but visible philanthropy could publicize elite status outside the state realm. Actively sought by fundraising abbots, such patronage affected institutional Buddhism.

After exploring the relation of Buddhism to Ming Neo-Confucianism, the growth of tourism to Buddhist sites, and the mechanisms and motives for charitable donations, Timothy Brook studies three widely separated and economically dissimilar counties. He draws on rich data in monastic gazetteers to examine the patterns and social consequences of patronage.