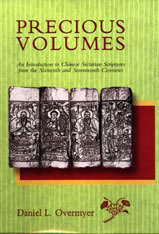 “Precious volumes,” or pao-chüan, were produced by popular sects in the Ming and early Qing dynasties. These scriptures were believed to have been divinely revealed to sect leaders and contain teachings and ritual instructions that provide valuable information about a lively and widespread religious tradition outside mainstream Confucianism, Taoism, and Buddhism. Largely neglected until now, they testify to the imagination and devotion of popular religious leaders. This book, the most detailed and comprehensive study of pao-chüan in any language, studies 34 early examples of this literature in order to understand the origins and development of this textual tradition. Although the work focuses on content and structure, it also treats the social context of these works as well as their transmission and ritual use.