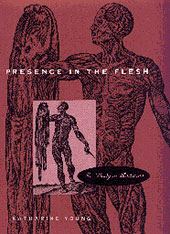 Presence in the Flesh

The Body in Medicine

“[Young] offer[s] up original insights… Young, whose Presence in the Flesh is a broad look at the entire medical profession (with special attention to the pelvic exam), began her research by spending three years trailing a gynecologist, a surgeon, a pathologist, and two internists at an unnamed university hospital. Wearing a tape recorder, she followed these doctors and their patients from the waiting room to the exam room and occasionally to the basement morgue. She noted, along the way, how the medical establishment urged people to disassociate themselves from their bodies so that ‘doctoring’ could take place… Of course, the most obvious forms of body banter are the ‘kidney in Room 311’ or &lrsquoheart in Room 312’ that St. Elsewhere and ER have made famous. But Young goes beyond that, exploring the ways in which patients are complicit in this disembodiment.”—Village Voice

“[This] is an essential text, the work of uniquely curious scholarship that seeks to know the rules by investigating the exceptions or seeks to establish norms by a catalog of anomalies… Presence in the Flesh seeks to say something abut the mind-body problem, the question about where the self resides and what that ought to mean to us.”—Thomas Lynch, Los Angeles Times

“This is a complex but timely book given the current pre-eminence of ‘the body’ in the social science literature. Young considers the ways in which medical practice acknowledges the presence of the person, in what to all intents and purposes, is the objectified body as perceived by medicine. Working from an anthropological perspective, but drawing on ethnography and phenomenology, Young also uses the ideas of Goffman… [This book] would be particularly useful to both health professionals and social scientists with an interest in embodiment.”—Ann Seed, Journal of Advanced Nursing

“Katharine Young is a skillful pathologist of medicine and its primary object, the Body Clinical. Wedding the ‘eagle’s eye’ of the surgeon to the keen ear of the ethnographer who is also a fine story teller, Young probes, slices, dissects, and holds up to the light the sometimes carnivalesque, sometimes grotesque ‘bodies’ produced in the many strange encounters of a medical kind. This book forces us to consider the weight of real bodies, i.e. bodies that ‘matter,’ the medical anthropologist’s revence on the aestheticized, abstract, postmodern ‘bodies’ of cultural studies. Bravo, and at last!”—Nancy Scheper-Hughes, University of California, Berkeley

“This original and finely textured book provides fascinating insight into constructions of ‘the body’ (and the persons associated with bodies) in medical encounters. Its chief contribution is to show how the fact of human embodiment requires a constant, artful negotiation of interaction so as to accommodate the varying ways in which a consciousness of bodies can recede from or impinge on ongoing activities. In the medical sphere in particular, Katharine Young shows how physicians and patients rely on convention to construct multiple versions of both body and self of the patient, as these are needed in the conduct of an examination or a surgical procedure. This study emphasizes how the medical encounter unfolds as a joint production, with patients usually collaborating in their own objectification.”—Marjorie DeVault, Syracuse University

“The richness and detail of its vision and the utility of its analytical framework will make Presence in the Flesh helpful to modernists and historians alike.”—Katharine Park, Wellesley College

“This fascinating look at an area of physician-patient interaction explores the contrasts that exist between the body as self and the body as object even in the situation of the postmortem examination… This work is complex and compelling.”—M.P. Tarbox, Choice