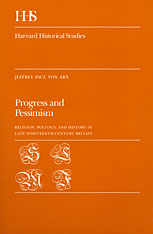 Faith in progress is a characteristic we often associate with the Victorian era. Victorian intellectuals and free-thinkers who believed in progress and wrote history from a progressive point of view—men such as Leslie Stephen, John Morley, W.E.H. Lecky, and James Anthony Froude—are usually thought to have done so because they were optimistic about their own times. Their optimism has been seen as the result of a successful Liberal campaign for political reform in the sixties and seventies, carried out in alliance with religious dissenters—a campaign that removed religion from the arena of public debate.

Jeffrey Paul von Arx challenges this long-standing view of the Victorian intellectual aristocracy. He sees them as preoccupied with and even fearful of a religious resurgence throughout their careers, and demonstrates that their loss of confidence in contemporary liberalism began with their disillusionment over the effects of the Franchise Reform Act of 1867. He portrays their championing of the idea of progress as motivated not by optimism about the present, but by their desire to explain away and reverse if possible contemporary religious and political trends, such as the new mass politics in England and Ireland.

This is the first book to explore how pessimism could be the psychological basis for the Victorians’ progressive conception of history. Throughout, von Arx skillfully interweaves threads of religion, politics, and history, showing how ideas in one sphere cannot be understood without reference to the others.