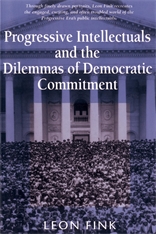 Progressive Intellectuals and the Dilemmas of Democratic Commitment

“There is much to admire in this book. The writing is fluent and the ideas are cogently expressed… Fink demonstrates with clarity (and sympathy) the dilemmas and difficulties facing the idealistic intellectual reformers on whose lives he focuses… Perhaps, most importantly, he rescues a number of intellectuals from relative obscurity.”—J. F. Lennon, American Studies

“[Leon Fink has] reconstruct[ed] the history of a generation of thinkers who came of age during the progressive ferment of the 1910s and then struggled to maintain a social-democratic presence in the academy and the public sphere… [His] engaging new book urges us to consider…the example of lesser-known progressives whose intellectual commitments led them into close collaboration with the labor movement and the merging welfare state. In a series of finely-drawn portraits, he probes the dilemmas of democratic engagement for a group that included labor historian John R. Commons, Wisconsin reformer Charles McCarthy, the right-leaning socialist William English Walling and his left-leaning socialist wife, Anna Strunsky Walling, the black civil rights leader A. Philip Randolph, and South Carolina educator Will Lou Gray… At a time when academic celebrity coexists nicely with political impotence, Gray’s honorable record sets a high standard, indeed, for measuring the accomplishments of our own generation.”—Casey Blake, Culturefront

“One cannot but welcome Leon Fink’s thoughtful and sympathetic history of Progressive intellectuals in twentieth century United States… This book is exploratory in the best sense, and at the heart of that exploration are the inevitable tensions between the ambitions of intellect and claims of democracy, between leadership and participation, expertise and deliberation.”—Thomas Bender, Political Studies

“With Progressive Intellectuals and the Dilemmas of Democratic Commitment Leon Fink joins the discussion of public intellectuals that has attracted much attention of late. Wisely adopting a biographical approach, he offers stellar portraits of half a dozen men and women who fit perfectly the definition of public intellectuals who sought, in some fashion, to educate the laboring masses… He tells a cautionary tale of the difficulties inherent in having the well-educated learn from the unlettered and the alienated connect with the masses… All who read this lucid, unsparingly honest work will derive a deeper appreciation of the difficulties involved.”—Alan Dawley, author of Struggles for Justice

“I read Progressive Intellectuals and the Dilemmas of Democratic Commitment with consuming interest… Fink’s concentration on the left Progressive community throws a good deal of light on engaged intellectuals in medias res and confronted with the problem of fashioning a proper role with respect to their rank-and-file clients. Fink’s people illustrate graphically the additional problem of sustaining or salvaging a democratic participatory tradition inherited from a Progressive age in today’s world of greatly widened political activity and specific interests… Fink writes clearly and even colloquially; exhibits an impressive command of ideology; and is a deft portraitist.”—John L. Thomas, author of Alternative America