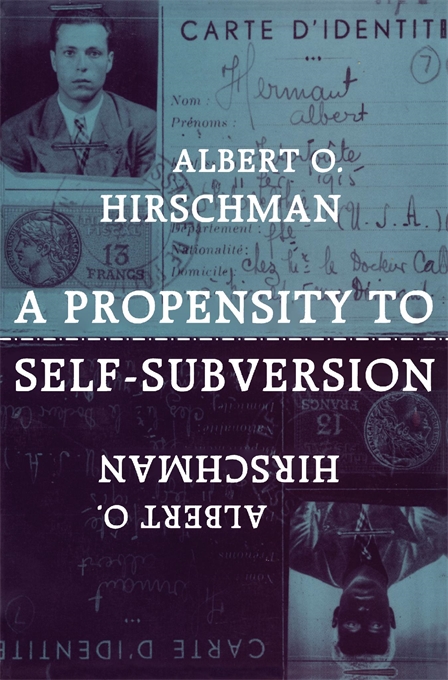 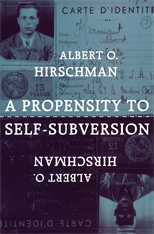 A Propensity to Self-Subversion

Albert O. Hirschman is renowned worldwide for theories that have been at the forefront of political economics during the last half century. In these twenty essays he casts his sharp analytical eye on his own ideas, questioning and qualifying some of his major propositions on social change and economic development. Hirschman’s self-subversion, as well as the self-affirmation that is also present here, reveal the workings of a distinguished mind. They also bring us fresh perspective on the material in his twelve previous books and countless essays.

In the substantial essays that open this collection, Hirschman reappraises points he made in such books as Exit, Voice, and Loyalty, The Strategy of Economic Development, and The Rhetoric of Reaction. Subsequent essays fruitfully reexplore the themes of Latin American development and market society that have occupied him throughout his career. Hirschman also forays into new puzzles, such as the likely impact, negative or otherwise, of the Eastern European revolutions of 1989 on the Third World, the on-and-off connections between political and economic progress, and the role of conflict in enhancing community spirit in a liberal democracy.

In a rare and particularly welcome section of the book, Hirschman presents autobiographical fragments that reflect his deep involvement in some of the important events of this century. He recollects his flight from Hitler’s Germany in 1933, his studies in Paris, his work with the antifascist underground in Italy in 1937–38, and his role in helping Varian Fry in Marseilles, in 1940, to rescue political and intellectual refugees from Vichy France. Such accounts deepen our understanding of how Hirschman’s penetrating insights took shape.