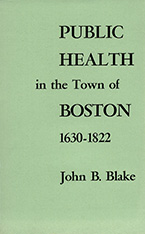 In this book, based almost exclusively on original source material, John Blake takes a detailed look at the public health history of the town of Boston. Historically, the author tells us, public health may be viewed as the science and art of preventing disease and promoting health through organized community activity. A significant part of this study is the insight it offers into the early attitudes toward disease and death as well as other basic political, social, and economic questions.

Dr. Blake outlines the development of public health practice from occasional emergency measures to a continuing program for the prevention and control of certain epidemic diseases. The introduction and increasing use of smallpox inoculation and later of vaccination are described and their importance evaluated. The book also discusses the further developments in the 1790s and the following two decades that resulted from a series of yellow-fever epidemics in northern seaports, including the establishment of a board of health and its efforts to prevent recurrence of this disease. The prevention of other endemic infectious diseases, though far more important in their effect on the community’s health, was largely neglected. Nevertheless, the principles of notification, isolation, and quarantine had been established and the need for governmental activity to protect the public health, for special public health officials, and for expenditure of tax money for public health purposes had been recognized.

This study, restricted in time to the period before Boston became a city (1630–1822), deals with the early years of the public health movement, a period that has been largely neglected. In comparing Boston’s experience with that of other colonies and England, Dr. Blake presents the European background in both the theory and practice of epidemiology and public health. The colonies themselves, whose differences caused many contemporaries to despair of their ever becoming a single nation, were yet bound by an essential homogeneity. “By and large they had the same language, the same religion, the same inheritance of British social and political ideals. And by and large they had the same diseases. Thus the history of public health in Boston becomes significant for the whole American experience.”